I made a videogame themed Jumble, and while I’m pretty proud of the puzzle part of it, the graphic design leaves a lot to be desired. I tried to see if anybody on staff wanted to help me with it, but everybody is too busy gearing up for E3. As a result of its ugliness, I have it past the break. Each of the scrambled words is videogame related in some way, and the letters with the orange outline can be arranged to form an answer to the question.

Otherwise, Jim looked at the Internet’s reaction to the Xbox One, the Podtoid crew released a new episode, we reviewed two stormy games, and so much more happened on this fine Friday.

Previews:
Deus Ex: The Fall is a full-fledged experience
Solving your own murder in Murdered: Soul Suspect
LUFTRAUSERS is just the right amount of crazy 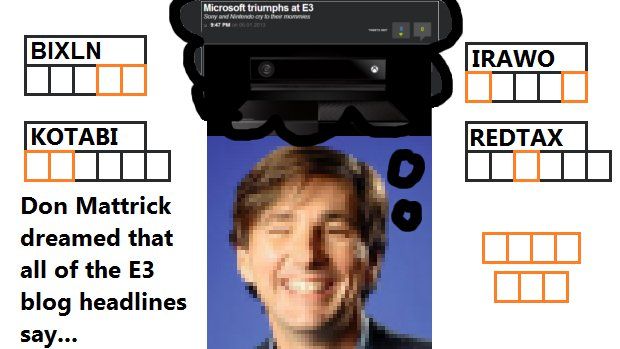 News:
Square Enix developing project linked to Legacy of Kain
Twisted Pixel’s Lococycle is an Xbox One launch title
Indie game Race the Sun gets a multiplayer update
XCOM and Uncharted 3 are next for PlayStation Plus
Sega will have Sonic Lost World, Castle of Illusion at E3
Hide your kids: Skylanders: Swap Force launches this Oct.
Weekend PC deals: Civilization, Codemasters, Defiance
Contra: Shattered Soldier runs and guns to PSN next week
Interplay now owns the Freespace IP
A Link to the Past 2 will run at 60 fps in 3D mode
Dungeon Defenders’ devs report atrocious work environment