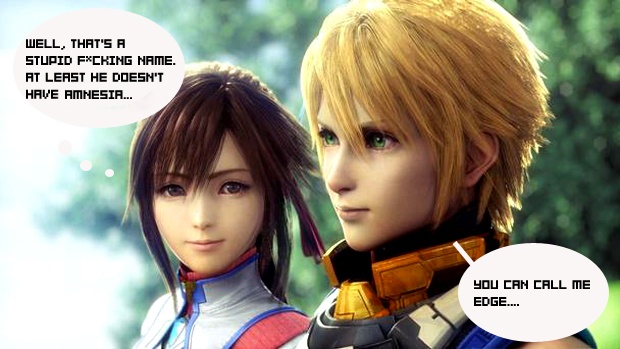 Colette gave us a great list today of the ten classic mistakes made by modern RPGs. One of the things Colette mentioned in her list was the horrible voice acting most RPGs get. This right here is a perfect example of some bad voice acting.

Ten classic mistakes made by the modern RPG

Those About to Die: Defeating the purple tyrant

Win a Nintendo DS Lite in our MyDoItAll contest!

Win a free Godfather II poster and T-shirt this week!

What the hell is going on with Fatal Frame for the Wii?

Apogee has a pair, studio trademarks ‘Balls of Steel’

Your Wii is sad and lonely, says Nielsen

Impulse gets a new GUI, Goo support, and much more

Finally buy XBLA games for friends … in a convoluted way

Rock Band not ruled out for the DS, but could it be LEGO?

iPhone wins, gets as much play time as other portables

All Strategy First games are 50% off on Steam

The 50 best-selling games this decade

Reserving inFamous at GameStop nets you an exclusive power

BioWare looking for betatesters for the Dragon Age Toolset

NYC not looking so hot in this new Prototype trailer

So what is Will Wright’s ‘Stupid Fun Club’?

Darkest of Days revealed, like Quantum Leap in FPS form