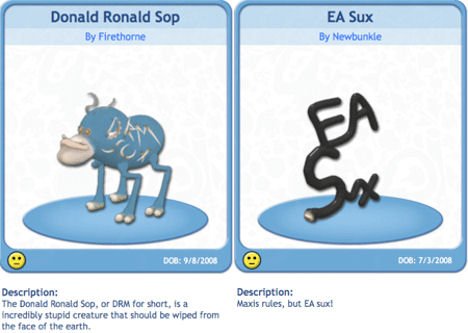 I just love the fact that someone went to the trouble of making a anti-EA Spore creature. I wonder where the thing poops from …

Jim has a ten new Golden Rules, Nick reviews Rock Band 2, win a Rise of the Argonauts faceplate, learn about the sad death of the Dreamcast, and plenty more happened on Monday.

Monday Regulars:
Wii Shop releases for week of 9/15: Strong Badia, Potpourrii, Mega Man 2
New releases for the week of 09/15/08
Podtoid 68 records tonight, sans a Tiff and plus a Toph
Domino Master and Feeding Frenzy 2 on XBLA this Wednesday

Contests:
Rise of the Arty-nauts: MS Paint your way to a Rise of the Argonauts faceplate!
A winner is you: South Park character creation contest winners announced!