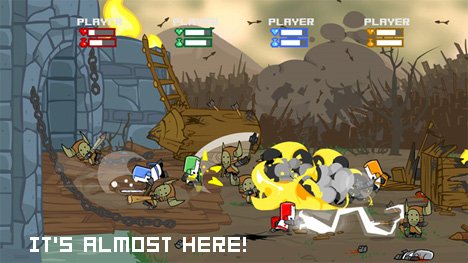 I am so happy that Castle Crashers has been given a release date. Oh sweet irony. I’ve been waiting for this game since last year’s PAX and it comes out the day I fly out to this year’s PAX.

HAWP takes a mid-season break, win a copy of Legend: Hand of God, some of Activision’s games are in trouble, some guy drives his boat with a Wiimote and plenty more happened on Monday.

Comic-Con 08:
Microsoft will ‘explore’ the Halo universe, not ‘exploit’ it

Contests:
Win a copy of Legend: Hand of God and a mouse to play it with

News:
Star Trek Online to hit consoles as well
Ubisoft hopes Red Steel sequel won’t stink as much with WiiMotion Plus controls
You don’t need to brave sweaty crowds to see the Mirror’s Edge comic book
Pachter: Nintendo has not forgotten core gamers, but still is rich
PSN/XBLA demo of The Force Unleashed with ‘unique ending’ hits next month
Worst emulation video ever: Dreamcast Shenmue running on PSP
Castle Crashers, Braid, and other XBLA titles given release dates
Midway confirms Jax and more for Mortal Kombat vs. DC Universe
Get Comcast, and then get a Wii
Microsoft responds to concerns about quality of XNA Community Games
Alien Hominid an unlockable character in Castle Crashers
Madden 09 simulation shows Vikings have most to gain with Favre

Rumortoid:
Does Bionic Commando: ReArmed have a release date?
Future of Ghostbusters and Brutal Legend in question

Galleries:
When Unsolved Crimes hits the DS this fall, these crimes are so gonna get solved
LEGO Batman screens featuring Man-Bat