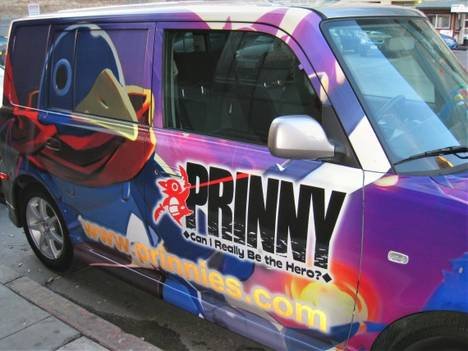 Yes, I’ve gone Prinny crazy. I can’t help it though! Prinnys are just so damn adorable! Sure, they’ll blow up if you shake them around too hard, but how can you not find them cute? And yes, there really is a Prinny car.

Originals:
Sony’s LittleBigPlanet holiday card too cute for words, so here are some images

News:
Xbox 360 for £99 at Zavvi
Microsoft ‘frees’ your avatars, launches another thing that is silly
Miis coming to the Nintendo DS, want you to walk with them
505 Games confirms Michael Phelps game in the works for consoles, iPhone
Grand Theft Auto: Chinatown Wars gets release date
Home will be a system seller, claims Sony
Child’s Play CD 2008: great music for a cause
Nintendo announces EU Q1 2009 line-up, some of it doesn’t suck
Teen banned from Halo 3, shoots parents in retribution
People urged to practice ‘patience’ in regard to network problems with Home
Club Nintendo goes (sort of) live

Galleries:
Nobi Nobi Boy screens confirm that the freak is still alive
Prinny: Can I Really Be the Hero? to be the first premium box game for the PSP
Froth at the mouth over these new Blood of Bahamut screens
Leaked Uncharted 2 images are pants-tentingly awesome
Coraline screens show dancing mice and brilliant art
Demigod flaunts its epicness once more in some new screenshots