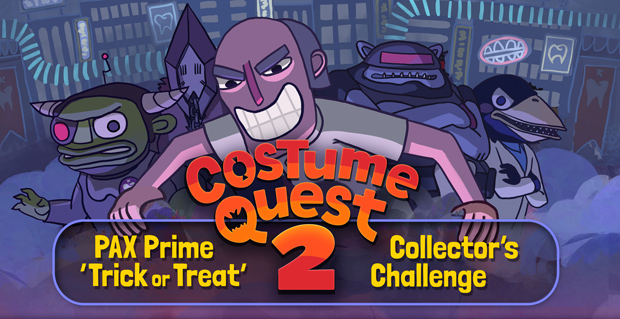 It wouldn’t be PAX without buttons

Midnight City is hosting a Costume Quest 2 ‘Trick or Treat’ Collector’s Challenge at PAX Prime later this week and it’s going to be worth setting some time aside for if you’re looking to score swag.

Essentially, you’ll need to play four of the publisher’s games — Massive Chalice (Double Fine, booth #117), Costume Quest 2, Videoball, and Slender: The Arrival (Midnight City, booth #6808) — to collect buttons, then head to the Oni Press and Fangamer booth (#3808) to get the fifth, final button for reading the Costume Quest: Invasion of the Candy Snatchers comic.

Then, with all five buttons, you can claim one of two prizes: either a Midnight City skull t-shirt or a Costume Quest 2  Treatin’ Bag. Are you hardcorn enough to handle that?