Now if we can just get some psionics in here…

Once considered the flagship reboot of the XCOM franchise with a side meal strategy game to go with it in Firaxis’ XCOM: Enemy Unknown, The Bureau: XCOM Declassified has found itself playing second fiddle in the eyes of many series fans. Straddling the line between action and strategy, The Bureau is making deliberate strides to blend the core tenets of the series into a modern third-person action game.

And you know what? It works. It really does work. 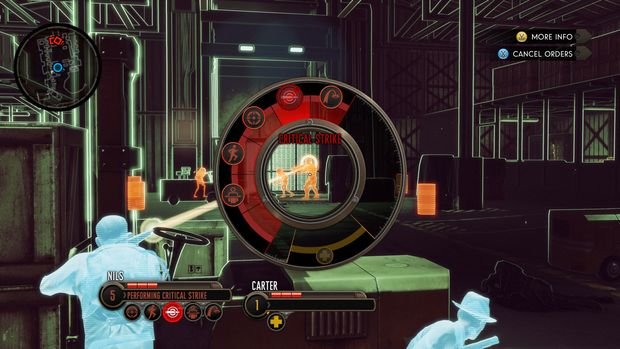 While we’ve covered the game before at length, I’ve since had a few lingering questions. One of the bigger ones was seeing how far permadeath would go. Since this is the XCOM series’ first big push to have a storied campaign with a central protagonist and supporting cast, would things get as crazy as to allow story-centric characters to be killed? Speaking with creative director Morgan Gray, “We push most of our story through characters who won’t be risked on the battlefield. Agents are characters with little ‘c,’ but they’re not crucial to any major narrative beat of the game.”

Permadeath may not be as far reaching as to have an effect on the plot, but it’s looming threat is very real in combat. Still, even there it can be shimmied around with quick work of the save system. Gray continues, “Because we’re straddling a couple different genres, trying to be an on-ramp for brainier and more technical forms of combat, certainly in the third-person space, we decided we’ll let people vote with their time.”

This tradeoff is not unlike what many players would have experienced in last year’s XCOM: Enemy Unknown. While the threat of permadeath is real, smart use of the save system will be able to cover you, so long as you’re okay with a trial-and-error experience. Even at higher difficulties, you will be able to reload saves as often as desired, as the brunt of their challenge will lie in smarter enemies and shorter revive times. There’s no official word on whether or not The Bureau will have a save-exploit-killing Iron Man mode.

“[Reloading saves] is as not as harsh in its consequences, but we put a lot of consequences in the game,” explained Gray. “We ask for a lot of you, and there is a lot of learning in this game … just that concept of Iron Man mode, we will probably not have something that is so punishing and hardcore, primarily because of the genre we’re going towards as a third person game.”

While you may find ways to get around some of The Bureau‘s systems, others — namely the upgrades — are set in stone. There is no characters respec option at any point in the campaign. In standard XCOM fashion, you will have to choose from a binary skill tree to determine how you will play your agents. Since you can have multiple agents from each class, this isn’t the biggest issue. However, since the player character, Agent Carter, has a skill tree all his own, you’ll want to think things through.

In my time with The Bureau, I saw myself favoring skills that played to the strengths of my preferred agents. Since I found a certain affinity for the support and engineer classes, my Carter was decked with skills to decease the cooldown of my healing ability, perfect for my engineer who I’d put out in front to lay mines. To assist my support agent, I’d opt for the ability to levitate enemies out of cover, giving the agent a clear line of sight to inflict high damage. 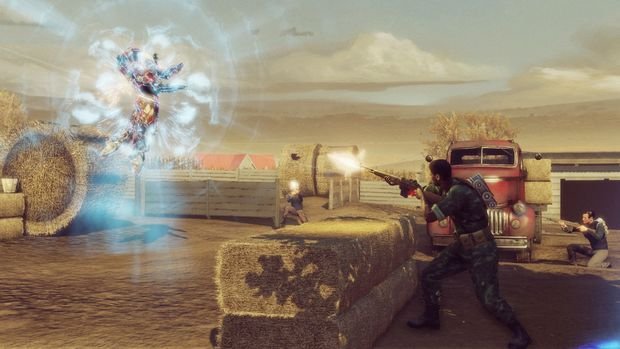 It’s in the ways you play around with your squadmates that The Bureau‘s strengths really start to shine. A lot of the success of the game’s marriage between real-time combat and the cerebral tactics expected of XCOM is due to the Battle Focus system. Playing The Bureau as a straight third-person shooter simply isn’t an option, and the game is quick to punish players who don’t respect the strategy involved. At the same time, the Mass Effect-esque command wheel that is Battle Focus won’t give you total reprieve from battle.

Going into Battle Focus slows down time to ten percent of its usual speed. This may sound like it’s just as good as time fully stopping, and in the most comfortable of situations, it can be. In other situations, I found myself frantically trying to get my support agent to throw down a shield for my engineer as enemy drones hovered above his half cover, chewing through his health. While this is all going on, I somehow miss the two Outsider aliens that were moving in to flank me and am quickly introduced to the game-over screen.

Walking a tightrope between genres is a challenge for any game to get right, but a challenge made greater for The Bureau: XCOM Declassified, as it comes from a series firmly associated with one over the other. It is, however, walking that rope really well. Battle Focus retains much more of the series’ tactics than some may have expected, making the perspective change more welcome as an alternative way to explore the franchise. The muted sense of permadeath will be a disappointment for some, but if you’re one of the many who exploited saves in Enemy Unknown, you’ll find it works similarly here.

Now, about those psionics…