The final release is set for Janurary 2015

We’ve talked before which games use Steam Early Access best. Titles like Prison Architect and Sunless Sea are two that come to mind for me; these are games that have a perfectly playable and enjoyable core game that has been expanded upon with patches and updates. Games that have a story, however, aren’t the type of thing you’d expect to be in Early Access, as you’d most likely prefer to get the whole thing up front.

Episodic games are, of course, a different kettle of fish as you’re buying the game with the understanding that you’ll get four or five installments at a regular interval. Even Double Fine’s Broken Age was only split into two halves after a snafu with budgeting after its successful Kickstarter. KING Art Games also ran a successful crowdfunding venture and it too has split the release of The Book of Unwritten Tales 2 into separate chapters.

The first Book of Unwritten Tales came out in November 2011, with a prequel following just a year later. It was a bright, colorful adventure game with plenty of jokes, some more successful than others. The sequel has been released on Steam Early Access in early September which was a surprising move for me. This is a genre people come to for the stories and often the jokes — the puzzles and actual mechanics seem secondary much of the time.

So to split up the game into chapters that will be released over time seems a confusing move. KING Art has said that future chapters will be added each month until the game’s full release in January 2015. There’s also some time needed for polishing and to add controller support.

Following on from the first game, The Book of the Unwritten Tales 2 centers around the adventures of the gnome mage Wilbur, the elven princess Ivo, and the roguish idiot Nate, along with his buddy The Critter. After quite an eventful entrance that has Nate falling from the sky, there’s a short tutorial on how you’re going to be playing the game.

Of course, you’d expect point-and-click adventures to have the same sort of interface but it’s good to just remind the player of any particular functions and controls that are specific to the game. Thankfully this time around, the item hotspot ability is made clear from the start (one of my complaints about the first game). 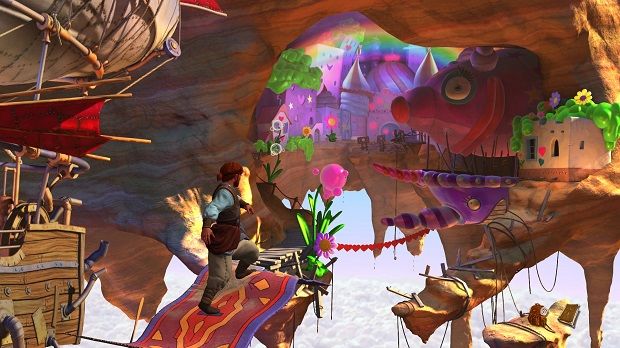 It turns out quite a lot has happened since the end of the previous game; the returning cast has since spent time in the Elven kingdom but now Nate and Wilbur have left to pursue other interests. Despite being the only gnome to show any aptitude for magic, Wilbur has departed to study magic with the great magician Alistair in the town of Seahaven. Reports of an epidemic reach the ears of Ivo, who has been cooped up in the royal palace after her and Nate’s short-lived relationship ended when he left under a cloud. Now Nate is literally falling from the clouds with his magic lamp.

The Book of Unwritten 2 follows the template laid out from the first game both mechanically and stylistically. The same self-referential sense of humor is back and there’s still a fair few videogame in-jokes that are pulled off unevenly. Having a literal red herring being a puzzle-specific item is kind of funny but not when you’ve got over half a dozen items in your inventory that seemingly have no use either.

The main section of the first chapter is based around Ivo trying to sneak out of the royal palace and make her way towards Seahaven, a process which takes hours. The whole section just drags and drags; Ivo first has to just escape her room, then make a potion, then activate a magic mirror, then find some gold…. it just goes on and on (my playtime for this first section was over three hours) and it’s compounded by spreading the puzzles over a handful of screens. Thankfully, Wilbur’s portion afterwards feels snappier, perhaps because at that point I was into the groove of how the game structures its puzzles. 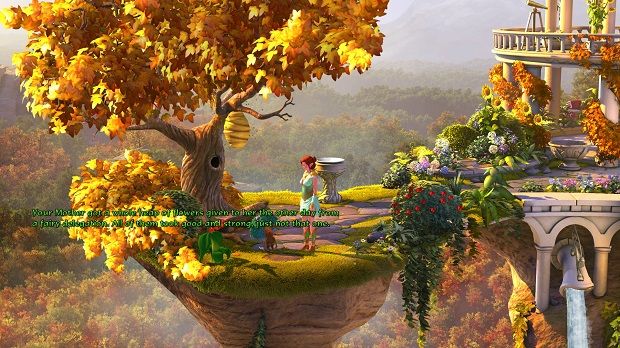 Puzzles are about what you would expect; you’re going to be picking up plenty of items and combining them to solve puzzles. At the same time, there seemed to be many items that could be obtained early on that weren’t needed until much later. Plus, quite a few objects I used didn’t disappear from my inventory afterwards. Now of course, there’s no way to know if you’ll need and item later in the game and maybe I’m just used to modern adventure games that are streamlined, but it was frustrating to leave an area with six or seven items still in my inventory.

Still, the environments are beautiful and eye-catching; the elven kingdom looks amazing in all its autumnal colors and even Wilbur’s small bedroom is filled with lots of small touches. This is where The Book of Unwritten Tales 2 reminded me of the early LucasArts adventure games, especially the Monkey Island series. Even when scenes were set at night, they were still vibrant and alive.

If you enjoyed either of the earlier Book of Unwritten Tales entries, you’re probably not going to find anything here that puts you off. The characters, tone, and structure of the sequel are still in tune with the first games. It would have been nice to see refinements to the style and range of the puzzles but KING Art is sticking close to what worked earlier in the series.

As for the Early Access issue, I don’t think there’s a problem in playing this game before release; what’s already been been made available is fairly substantial in length and the developers seem to be keeping to their schedule of monthly updates. While the game doesn’t appear to have been designed around an episodic format, the format doesn’t hinder it all.