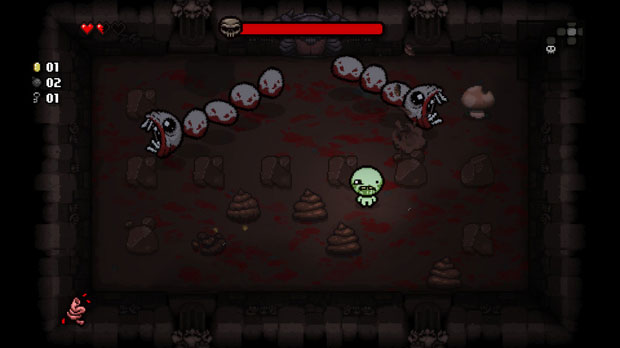 PS Vita owners especially are in for a treat

One of my favorite parts of PAX Prime this year was an appointment with Nicalis. Not only was the meeting away from the crowded, noisy Washington State Convention Center, it was an opportunity to get sucked into The Binding of Isaac: Rebirth. And that’s exactly what happened.

I can’t actually recall how long the hands-on session lasted — time quickly slipped by, as tended to be the case with the original game — but it was certainly quite a while. At any rate, it might as well have been mere minutes because that’s what it felt like. As such, I’m struggling to describe the experience outside of general thoughts. Well, here goes:

Twin-stick controls are the best. Co-op is super fun, even challenging. The new room layouts, bosses, items, and everything else crammed into what was an already substantial game make Rebirth feel like The Binding of Isaac 1.5. Too familiar to be a full-blown sequel, sure, but better in nearly every way. Looks and plays great on PS4 and PS Vita. It truly feels at home on a handheld.

Fans, you’re right to be impatient for the November launch. I know I am. As for everyone else, you don’t know what you’re in for, but Rebirth will be the perfect opportunity to find out.

Also, you saw the (fittingly) bizarre release date trailer, right? One of those masks was hanging outside of Nicalis’ hotel room. I had to do a double take.