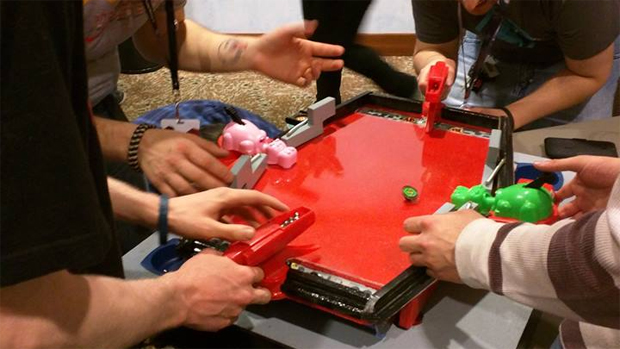 A true blend of genres

Let me set the scene: Day 1 of PAX has come to a close, or at least the show floor has. My friends and I have just finished dinner and are on our way back into the convention center to check out the Super Smash Bros. tournament. As we’re about to enter through the Westin skybridge, I spot some people playing Crossfire. Oh man, Crossfire is great! I hope I don’t get caught in it!

So I say to my buddy I say:

To which he replies:

What I saw next blew my fucking mind.

I have no idea what to call it, but these gentlemen were playing a homemade hybrid of Crossfire and Hungry Hungry Hippos, with a little bit of pinball thrown in for good measure. It seemed pretty sturdy too, so there was a lot of care put into this.

From what we could gather, this is a team game: one Hungry Hippo and one Crossfire shooter per team. They drop a puck, though I’m not sure what game that came from. You can see it in this image spinning: 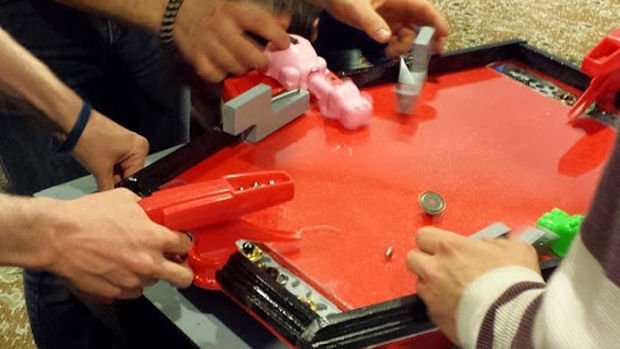 They had a handheld device that held the spinner, then they gripped the device and it dropped the spinner, already spinning. I’m sure some of you commenters know what it’s from, so let me know!

Anyway, the goal was for the Hippo to eat the spinner. The Crossfire guns were used to help direct it towards the Hippo, and the pinball flippers seemed to be used in order to return the Crossfire balls to their partner, or deflect others from the opposition.

There was as much hype surrounding this game than anything else I saw at PAX that wasn’t giving out crappy swag. To the people who invented this game, I love you.

Filed under... #AMAZING#Offbeat#PAX#Things gamers do