Instead, I’ll just recap the chat as best I can in bullet-point form. Sneak preview — we talk about a lot stuff; the origins of the name “Grasshopper”, Yamaoka-san’s work on Snatcher, the potential for more No More Heroes, Yamaoka-san’s future with the Silent Hill series, the difference between Eastern and Western developers, Grasshopper’s future Kinect project, Yamaoka-san’s and Guarini-san’s punk rock band, and much more. Details await after the jump. Sorry if I missed anything. You can always watch a replay of the live-stream (seen above) for yourself if you want to catch something that I left out.

Oh, and don’t forget to enter our awesome No More Heroes 2/Silent Hill contest. It’s free to enter, so it would be silly of you not to enter, especially if it’s just because you don’t like Twitter. It’s easy enough to start a Twitter account just to enter the contest. You’d never have to use it again, ya dingus!

* Before becoming a videogame composer and producer, Yamaoka-san worked on the cult hit Snatcher on the Sega CD in the programming department

* Guarini-san and Yamaoka-san both state that they have a huge level of creative freedom at Grasshopper, and that they love their work environment.

* Guarini-san hopes that the next No More Heroes game continues to stay away from the open world gameplay, though that decision will be entire up to Suda51.

* Yamaoka-san states that he’d love to compose music for Silent Hill games again, but that first he’d need to come to an arrangement with Konami regarding the specifics.

* Yamaoka-san believes that the Silent Hill series “should be made by Japanese people” because “Silent Hill, as a concept, belongs to Japan”, though it’s “absolutely OK” for foreigners to “join in” on the development of Silent Hill games. 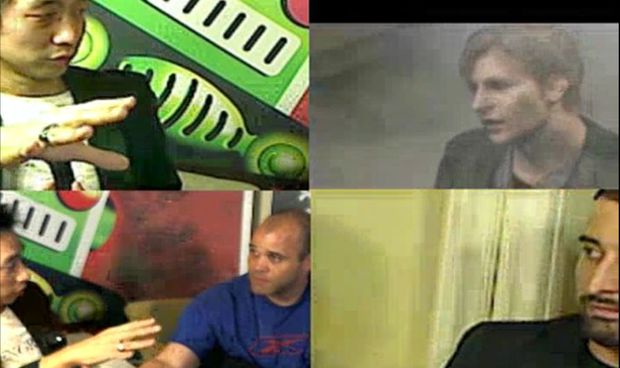 * Guarini-san states that he feels it will be a “natural step” for Suda-san to make a film, though he probably wouldn’t create a film related to his games.

* Yamaoko-san states that the Silent Hill film was “generally well done, because the director is “actually a real Silent Hill fan”

* According to Yamaoka-san, Grasshopper Manufacture (Flower, Sun and Rain, Killer 7, No More Heroes) got it’s name from Grasshopper CEO Suda51’s love of the Smiths, and the way that their music helped him to get over depression and pessimism.

* Guarini-san states that he’s seen a lot of Western developer’s state that they are envious of Eastern developers, and vice versa. In general, he states that there is a tendency for developers from both sides of the world to have a “the grass is always greener” attitude towards each other.

* Yamaoka-san states that in order to achieve success in Japanese game development, you need to “have courage”, “stick out” and “resist being pushed down” by conformism. He states that Shigeru Miyamoto is one of example of a developer who has achieved this.

* Yamaoka-san, Guarini-san, and other members of Grasshopper started a punk-rock group called Grasshopper deManufacture. They’ve played two shows so far, and plan to play more in the future. They aren’t sure about releasing a CD, but they state that “it’s possible.”

* Guarini-san states that the utilization of visual abstraction is something inherent in Japanese culture, as seen in Japan’s fine art, Manga, and many other prominent Japanese art forms. He states that this tendency towards non-literal depictions of reality are a key part of what differentiates Japanese game development from Western game development.

* Guarini-san agrees that in the West, there is a large divide between big budget developers and indie developers, with little room in between. He believes that Grasshopper is a developer that has managed to be both indie and mainstream simultaneously.

* Yamaoka-san has a lot of respect for Tommy Tallarico

* Guarini-san states that he enjoyed Eternal Darkness on the Gamecube, though “it wasn’t quite weird enough” for his tastes.