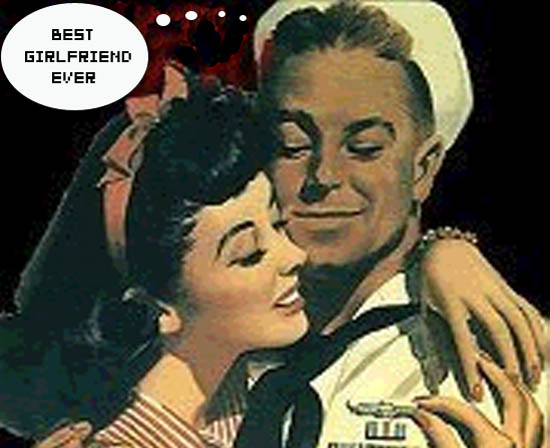 If a woman did this for me, I would marry her too. That is, if I was a man in the military.  The more I think about that idea, the more confused I get, so I think it’s best to just move on. Fun For Our Troops was started by a military wife named Stefanie Doctor Shea. The idea behind the non-profit was to help deployed military personnel to relax between missions by helping them to feel as if they were at home. The couple were both active Wii gamers before Sgt. Shea shipped off for duty in Iraq.

Dana Blackman Brady is Stefanie’s partner-in-crime behind Fun For Our Troops and is married to a former Army ranger herself. While it’s no surprise there is no official support for the cause from the Defense department, the women have worked out a program that allows them to get the games to the troops, which Stefanie describes below:

We are working on an official website which will allow troops to sign themselves up as recipients or family members can sign them up. They will also be able to tell us what, if any, systems they do have so we can donate appropriate games.

Hopefully the site will be up in the next week or so (we have someone donating their services to build the site).  We are willing to work with all branches of the military but the recipients themselves must be on a deployment.  Our intention is that the equipment we send over will be passed on to troops in the unit that will replace them.

This is just incredibly cool, presenting the absolute reverse of the stereotypical wife or girlfriend who constantly complains about her spouse’s gaming habit.  If you should want to donate to the cause, check out the Web site, which happily accepts any form of gaming related donation from consoles to gift cards.

[Via GamePolitics — Thanks Joe!]