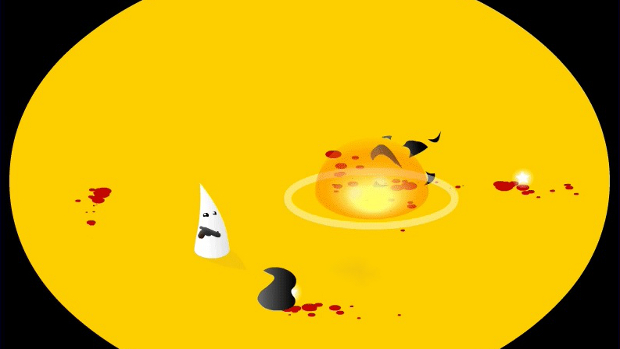 In an effort to poke holes in NRA vice president Wayne LaPierre’s belief that only a “good guy” with a gun can stop a “bad guy” with a gun, Paolo Pedercini has created The Best Amendment, a satirical PC game, reports Wired.

The Best Amendment puts players in control of a little white cone that needs to collect a star before the timer runs out. Each new level adds an additional black cone which the white cone will need to shoot to get more stars. The behavior of the black cones is based on how the player acted in previous levels.

The game creates a cycle of violence, with the black cones mimicking the violence of the white cone. Eventually the player will become overwhelmed by enemies repeating the aggressive actions of the player’s previous life. The message is quite clear: Violence begets violence.

Pedercini is no stranger to creating games with social commentary. One of his titles, Operation Pedopriest, condemns the Catholic Chruch, while Phone Story highlighted the poor working conditions of certain factories before getting banned from the App Store by Apple. It can now be found on the Android marketplace.

The Best Amendment can be downloaded for however much you think it’s worth.

The Best Amendment Indie Games Takes On the NRA [Wired]