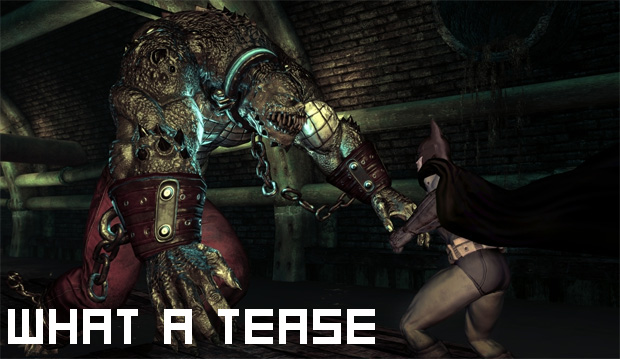 It’s time to play as the Bat again. The Batman Arkham Asylum demo is available for the PC, PlayStation 3 and Xbox 360. It’s a big download. The Xbox LIVE version weighs in a little over one-and-a-half GBs. But don’t let the size fool you — like any good demo, this Arkham Asylum piece is nothing more than a scrap of content, a mash of vertical slices of early conflicts in the game.

I gave it a spin earlier this afternoon. I loved the visual touches to the environments, and came away annoyed with the appearance of the minor characters. Gordon and the guards and thugs look like aged wrestlers. I also walked away uncertain of the combat system. You’re only allowed to use a fistful of attacks, and frankly, the AI wasn’t too bright. Then again, perhaps the demo was just trying to hold my hand.

I want to know what you guys think. Did the demo convince you to buy it day one? Would you have liked to seen more? Do you think it sucked? Discuss this thing.