Over on the Eidos forums, a FAQ for Batman: Arkham Asylum has an interesting addition under the section laying out exclusive content for the different platforms the game is releasing on in a a couple of weeks. In there is a listing for a “Batcave Outpost Apartment” for PlayStation Home.

According to the forum post, the Batcave will have a considerable quantity of goodies in it. There will be a Batmobile and Batwing, a Batsuit and an assortment of Bat-gadgets in the space. It goes on to state that the content will be free.

Without any official word from Eidos on whether or not there will be Home freebies for Arkham Asylum (the image above is from MK vs. DC), we’re chalking this one up as a rumor for the time being while we wait to hear more. As a consumer, I still don’t see much of a reason for me to hang out in the online space. That said, if I were whiling away the hours making suggestive comments to random passers-by who pretend to be female, I’d totally want to be able to go home to a decked-out Batcave.

[Update: Originally a “rumor,” this has now been confirmed. Playing Batman: Arkham Asylum on your PS3 will unlock a special Batcave Outpost personal space, seen after the jump.] 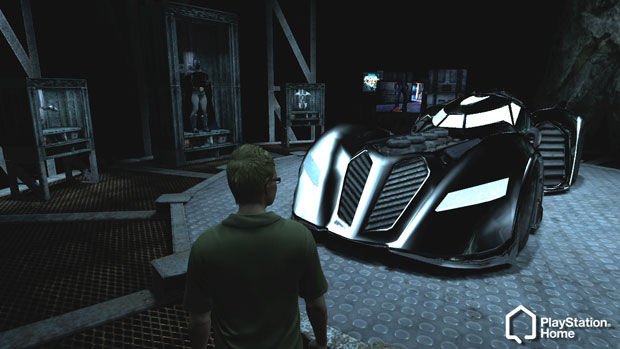