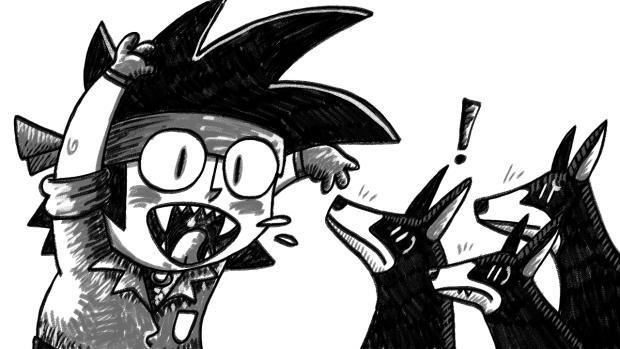 The formula for this month’s episode of Once Upon a Pixel was a bit of an experiment. Instead of taking a game’s story and adapting/twisting it to fit something else, we decided instead to delve into the world of videogame-based literature. This idea actually predated the series by several months, starting after Anthony and I found several of the Worlds of Power books for cheap. We have been looking for an excuse to share them with the world ever since, because they’re so bad, they’re amazing.

If you haven’t watched me read and illustrate excerpts from the novel “based” on the story of the original Metal Gear, you can still catch it over at GameTrailers. Once you’re done, hit the jump for all the artwork and some behind-the-scenes stuff.

Only ten Worlds of Power books were written: Blaster Master, Ninja Gaiden, Castlevania II, Bases Loaded, Wizards and Warriors, Mega Man 2, Bionic Commando, Before Shadowgate, Infiltrator and Metal Gear. You might think that they didn’t write enough of them, but anyone who’s read ’em will tell you that ten is plenty.

Any of the above would have made for an interesting episode (and we might revisit them and other videogame novels in the future!), but we chose Metal Gear because, initially, we thought it would be funny and interesting to have it contrast with the MGS episode.

Since I didn’t have to focus on any writing this time, the most important thing was to make Justin Halley look like a bizarro Solid Snake — someone who looked a lot like him, but different in ways that you couldn’t quite place. This was the first design sketch of him, CaTaffy and South:

These were drawn by the following (approximate) directions from Anthony: “South should look kinda like Campbell and CaTaffy an evil Arab based off of Muammar al-Gaddafi.” As for Snake, I gave him a Metal Gear 1-era outfit, a bit of lankiness, a generic, spiky videogame hero hairdo and the nickname “Solid Snack.”

They all evolved into much better looking designs, but the more I drew Snake, the more he started to look like the Snake I drew last time. This caused the bizarro world element to fall into the background, but thankfully, the book was funny enough on its own merits, and not just to those who knew the real story or Snake’s character.

It was very hard to pick out scenes; stuff like Snake’s encounter with the attack dogs and the trained killer scorpions were no-brainers, but there were plenty of other gems. This is probably my favorite part that didn’t make the cut:

Attached to the big man’s uniform by a pin was a plastic card, bearing a strange insignia and encoded with a series of raised symbols. Also on the seat was a pack of cigarettes. Halley reached for them, but drew his hand back. Could they be poisoned? His instincts told him that they could be a deadly trap. And, even if the cigarettes contained no added poisons, they were deadly enough in themselves. He decided to leave them where they were.

Not only is it an anti-smoking message for the kids, but it’s also something we know that the “real” Snake would never do!

I really wish we could have fit more of the book into the episode just because I don’t feel like I gave you the full extent of the book’s awful hilarity. About 75% of it is flowery, unnecessary descriptions, and 20% is made up of repetition of the characters’ names. “Solid Snake” or “Justin Halley” appears in every other sentence. The bulk of the story is literally, like, “Justin Halley shot a gun. The bad guy was hit with Solid Snake’s bullet. Then Solid Snake hit the other bad guy with a karate chop, which Justin Halley was a master of.” It’s bad enough that the author didn’t know how to use third-person, singular personal pronouns, but he couldn’t stick with one name for the main character.

The last 5% of the book follows Solid Snack as he makes his way through Outer Heaven, finds guns and rations in trucks, searches for eight different card keys and takes down CaTaffy, which really isn’t the most thrilling story ever. It was probably for the best that we cut it down like we did. But if you’re really curious, you can always check out James Rolfe’s reading of the entire Mega Man 2 novel.

By the way, it was a total coincidence that we did these things at nearly the same time. No one ripped off anyone! I’m just really glad we didn’t do the same one (MM2 is one of the few books we don’t have).

It took me a while to settle on the drawing style. At first, I wanted to imitate the style of woodblock illustrations found in old novels, but that ended up being a bit too complicated. I then decided to make the images grayscale and sketchy, which was a lot easier, but as you can see from the image above, that style was a bit lackluster. I hated it right away.

A lot of time was dedicated to experimenting with different combinations of brushes. I must have went through every drawing tool in Corel Painter before stumbling on a very nice digital sumi-e brush.

I already had the basics for the three main characters down by this point, so to keep from slowing down too much, I just made up the rest as I worked. The Shotgunner was easy; I just had to make a stereotypically huge, brutish man. A little bit of research guided me as to what Grey Fox looked like pre-ninja suit:

And Pettovich was basically just Otacon with less hair:

I worked on the art little by little over the course of the month, but due to bad time management, I was up until 6 in the morning the day the episode went up, drawing the last few scenes in a rush to get done. Anthony had it even worse, as he had to wake up and edit the episode after I had finished. Usually, I watch the editing process and try to help out, but this time I was passed out asleep in the next room. Oddly enough, I think some of the best drawings were done as I fought back sleep.

Lastly, here’s a bit of a closer look at the special intro this episode had.

What better way to start than with a Dtoid bobblehead? A Mudkip with an E-tank looks on.

It was really fun to throw all my nerdy, game-related junk all over the place to film this thing, but the best thing was making all these “photographs” of my favorite game characters. Here’s Skeleton-T (Puyo Puyo series), Klonoa, the cast of Sexy Parodius and Opa Opa (Fantasy Zone series).

An ornate frame holding Marina (Mischief Makers) sat beside The Book, along with Mega Man and a champagne glass, in a desperate attempt to look somewhat fancy.

We had to speed up the into, so a bit of footage didn’t make it in; in it were stacks of EGMs, a copy of Grand Theft Childhood, and portraits of Quote from Cave Story and Yoshi golfing.

In the gallery below is pretty much every single image I drew for the episode. Most were used, but there are a few Snake expressions and scenes that didn’t make the cut. Enjoy! Be sure to stay tuned for upcoming episodes, and maybe some news regarding the very first OUP t-shirt!