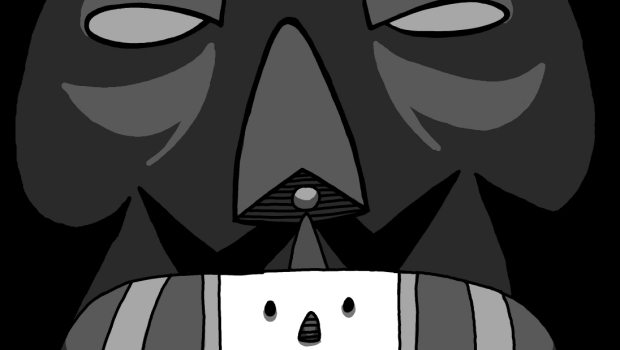 Did you enjoy last week’s Once Upon a Pixel episode? Want some insight as to how and why I created the dark world that Death Ball takes place in? If the answer to either of these questions is “no”, then maybe you haven’t seen it yet. I’ll give you a moment to fix this if you so choose.

Now, if you answered “yes”, you’re in luck! Below all this text is a gallery of most of the original art used in the episode (it’s only “most” because I didn’t want to include the boring, slightly different animation frames). If you hit the jump, I talk a little about the Katamari games and how they inspired me to turn their world upside down and drain all the color out.

It was Anthony’s idea to do a dark interpretation of a happier game this time around. At first, I wanted to try Animal Crossing, but soon realized how many times the whole “Nook is actually an evil businessman!” thing has been done and scrapped the idea in favor of something a little more original. My fallback game was Katamari Damacy.

A lot of people seemed to wonder how in the world I came up with the Sin City-esque world of Death Ball, which is weird. I thought everyone felt that the King of All Cosmos is a bit of a crappy father. He likes the drink, always gets himself into deep trouble for it, and sends his son to clean up the mess. He even makes the Prince be the one to smooth over relations with other planets, which should be a king’s job!

Then there are the abusive scenes that play out every time you fail to make your katamari meet his standards. These images have kinda stuck with me over the years for being shockingly violent (for a game with rainbows and mushrooms and singing ducks), specifically those within We <3 Katamari, where the large and shadowy King shoots lasers out of his eyes after expressing his disapproval toward his son’s offerings. Those scenes were partially where this OUP began.

If you’ve played We <3 Katamari, you may remember the bird and elephant stage, where you can make the biggest katamari the game will allow. If you manage to get big enough in this stage, you can actually roll up the King himself. It took me dozens of tries, but the moment where I was finally large enough to knock him over and up into my katamari was one of the coolest and most satisfying gaming moments in my life.

After being rolled up for the first time, the King attempts to describe it. “… It somehow feels happy. Dreamy, that’s what it is.” His words made it sound like like he was embracing death or the light at the end of the tunnel, so to speak. This moment was the other real-life portion of the Katamari series that inspired me (which is why the bird and elephant show up in the panel depicting Earthlings).

So I put two and two together. The Prince surely resents his dad a bit for all that he’s put him through, and through experiencing the bird/elephant level of We <3 Katamari, he knows that his only weakness is assembling the largest possible katamari. Death by rolling would be quite an ironic and twisted way for the king to meet his end, and it would also be a nod toward one of the best Katamari levels ever devised.

Originally, the Queen was only going to appear as a supportive character to the Prince. The King’s abuse toward him would be reason enough for his rage. But then Anthony, who is much better with the writing stuff than I am, suggested I use her instead. As someone who is married to the oafish King, the Queen must feel his backlash more than the Prince, even. Because she is seemingly kind and tolerant in the games, it just made sense to make her Death Ball character a battered wife. Her getting beat up after trying to defend her son was the perfect scene to send the Prince over the edge.

Not to say that this is how I think things really go down in Katamari Damacy‘s world. It’s quite obvious that despite his shortcomings, the King is a nice guy who loves his wife and son. He’s kinda self-absorbed, sure, but he really just wants everyone to be happy. I just took his worst aspects and built the story upon them. So, no disrespect, Mr. Of All Cosmos!

On the technical side of things, this episode went rather smoothly. I felt that this revenge story would be best conveyed through graphic novel-style images and narration. Instead of relying on my usual drawing program, OpenCanvas, I sketched, inked, and colored in Corel Painter X, because of its “realistic” looking pens. This was also the first time I had ever worked entirely in blacks, whites and grays. The whole thing was a huge experiment in technique and style that I think turned out pretty well.

As far as the writing goes, most of the credit can go to Anthony. He’s awesome. I only wrote out the first, very bareboned script to draw off of. The fleshing out of the dialogue actually didn’t happen until the very end of production, but it’s a lot of what made the episode what it was. So, last but not least, I have to give a lot of props to that guy.

As always, many thanks to everyone who watched and enjoyed this episode. Keep your eye on Destructoid for more!