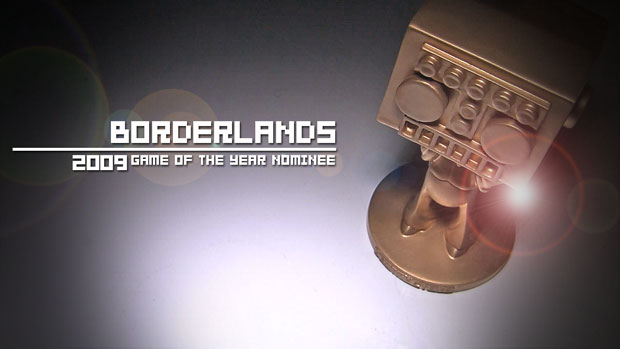 A multiplayer zombie apocalypse extravaganza. A magnificent, thrilling around-the-world adventure. A classic, perfectly designed platformer. Those are the three games that have already been nominated for Destructoid Game of the Year 2009. What will the fourth be?

If you look up a few inches you will know, but let’s just pretend you went blind for a second and formed some sort of tunnel vision that only allows you to see these few paragraphs and nothing else. Oh God! WHAT ARE YOU GOING TO DO?!

First, calm down. I will help you through this. Second, forget about the fact that you should probably be rushing to the hospital right now. Instead, just stick around for a second and find out what game takes the honor of being the 4th nominee for Destructoid Game of the Year 2009. Here’s a hint: It rhymes with “porderhands.”

Hit the jump, watch Rey’s amazing video, celebrate the exciting announcement by taking off your top, comment about how handsome you look with your top off, and GET YOURSELF TO THE DOCTOR! Seriously. Something is wrong with your eyes, man. 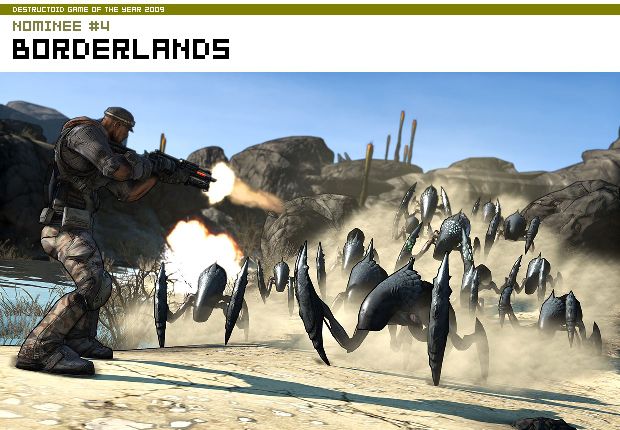 Borderlands is Diablo with guns.

Sure, saying that simplifies the overall experience of the stellar enemy-fighting, loot-grabbing, level-gaining first-person role-playing game, but it’s a pretty accurate description. If you are, or have ever been, a fan of Diablo, you have probably already played and fallen in love with Borderlands. But even if you aren’t a fan of Diablo (blasphemy!), the gameplay in Borderlands is so entertaining that you are pretty much guaranteed to have a great time.

Gearbox may have taken a big risk by releasing Borderlands during the busy holiday season, but their confidence in the game’s quality, despite the competition, paid off, as Borderlands has already grown a healthy cult following. And it should. It’s one of the best videogames of the year, dammit! Sorry, I don’t mean to sound angry. I am still worked up from thinking there may be some people out there that don’t like Diablo.

Borderlands is a deep, beautiful, massively addictive role-playing game and an absolute blast to play.

From our original review: “With tons of weapons to find, a great co-op system, fantastic art, and a whole bunch of exploding bodies, Borderlands is worth your money. Even my plans to jump into the game for five minutes to grab screenshots would suddenly turn into hour long play sessions without me even realizing it, and even having done most of the quests twice, I still want to head back and try again with a new character class. The game is simply fun — and at the end of the day, that’s what really matters.”

What do you think of our fourth nominee? Have you been lucky enough to discover the joy of Borderlands? What final game do you think is going to make the list of five nominees?

Don’t forget to check back tomorrow for the reveal of the final, 5th nominee for Destructoid Game of the Year 2009!