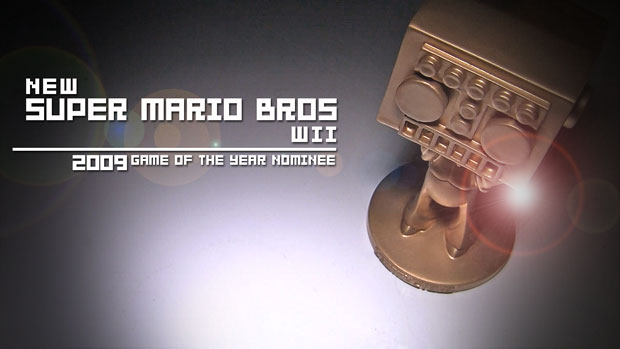 Come and knock on our door! We’ve been waiting for you! Where the kisses are hers and hers and his, it’s time for the third Destructoid nominee!

Okay, fine, that classic ditty doesn’t work as well with new lyrics, but you can’t punish a guy for trying to shoehorn in a Three’s Company reference, can you? *tightens Mr. Furley ascot*

Since Rey is secretly creating the videos that accompany these nominations in his techno-fueled laboratory, I don’t get to see them until right before the post goes live. Because of this, I never really know how to introduce them except by just making an educated guess and saying they are amazing. Since Rey is super talented, usually that guess is quite accurate. Whew! Thank God for talented people!

The videos are obviously the stars this week, so let’s all bask in the glory of Rey’s work by watching the above video and then, if you want to, hit the jump for a text description of the 3rd nominee for Destructoid Game of the Year 2009. Ugh. Text. It’s like drinking a stale beer at the Regal Beagle. Am I right, guys? 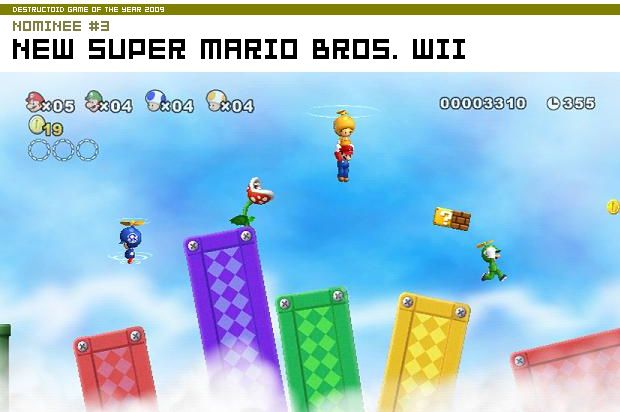 One thing that many people are forgetting to mention in regard to New Super Mario Bros. Wii is that it is the first 2D side-scrolling classic Mario platformer to appear on a console (not a handheld) since the Super Nintendo. That’s a long time, and alone is a reason for its significance.

But even ignoring that milestone, the reason New Super Mario Bros. Wii is one of our nominees for Game of the Year is because it is absolutely outstanding. Level design in a Nintendo game is unrivaled, and New Super Mario Bros. Wii proves this. Every stage (of which there are many!) is lusciously designed. And even better, four players can play at the same time! Sure, you can’t play online, but the game is so much fun you won’t even care. And, honestly, playing in a room with three friends is part of the wonderful experience. Jumping on your friends’ heads (in the game!) and swallowing each other with Yoshi (again, IN THE GAME!) is a blast!

New Super Mario Bros. Wii doesn’t do anything revolutionary, but it is easily one of the best Mario games in the worshipped series. And that is saying a lot.

What do you think of our third nominee? Are you a fan of New Super Mario Bros. Wii? What other two games do you think are going to make up the list of final nominees? Are you enjoying Rey’s videos thus far? And who’s the best? Chrissy, Cindy, or Terri?

Don’t forget to check back tomorrow for the reveal of the 4th nominee for Destructoid Game of the Year 2009!