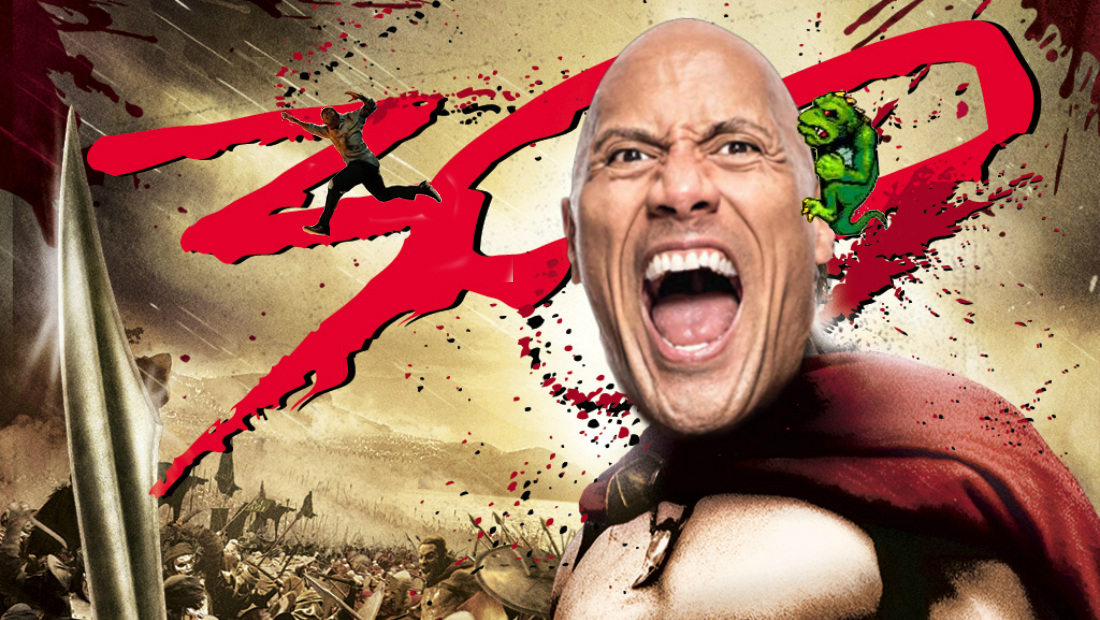 Everyone needs to go see Eighth Grade, a modern coming-of-age classic (that is not like Die Hard at all)

Yippee ki-yay, motherf**kers, and welcome back to The 300, my ultra-violent, hypermasculine attempt to watch 300 movies in theaters in the year 2018. I’ll be catching new releases, classics, festival films, and overlooked gems to explore the wide world of cinema in all its forms. By casting a wide net, there’s bound to be something that you can also enjoy and share.

I tried to enjoy my summer a bit more by hanging out with human beings and not going to the movies for two days. Don’t get me wrong, I love movies, but as I’m nearing the 200 mark, all I want to do is take a week off from going to the movies and binge on some books. I found a free copy of Jesmyn Ward’s Sing, Unburied, Sing on someone’s stoop a few weeks ago, and all I want to do is get to that, re-read Cormac McCarthy’s Blood Meridian, and finally finish Zadie Smith’s On Beauty. (I love Smith’s writing, but this one has been a slog; it just isn’t doing it for me.)

But, we’re back in the theaters and marching to the goal as much as possible since MoviePass looks like it could go under any day now. That will make the last 100 interesting. At least I get to see a few movies at the Japan Cuts Film Festival, which starts this week. This includes another film by anime director Masaaki Yuasa, the filmmaker behind Mind Game (The 300 Week 10) and Lu Over the Wall (The 300 Week 8). 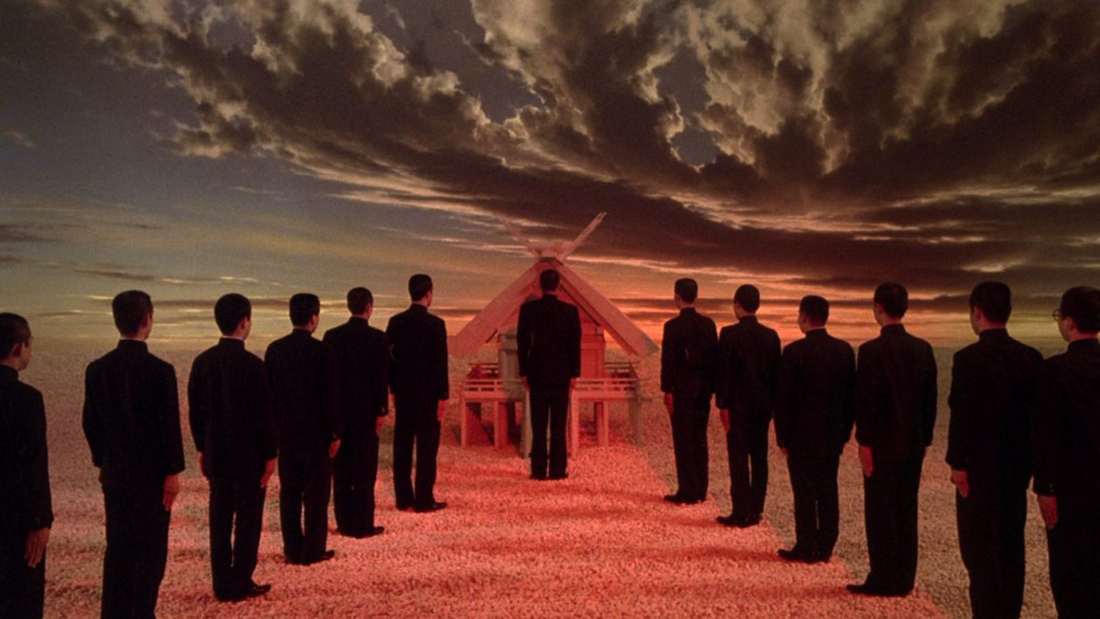 First Reformed (The 300 Week 22) may be a late career milestone for Paul Schrader, but his masterpiece as a director is still Mishima: A Life in Four Chapters. It’s not just Schrader’s best movie behind the camera but a lively, imaginative, poetic play on the often formulaic biopic. Schrader examines Japanese author Yukio Mishima from three different perspectives that are intercut over the course of the film:

One of my issues with First Reformed was that the film didn’t delve deep enough into the main character’s crisis of faith. I wanted to know more about his views on environmental decline, and how this sparks a spiritual awakening, radicalization, and eventual apotheosis. By contrast, Mishima’s interlinked narratives provide a way to explore the author’s internal life without having to state everything outright. An artist’s last day of life and an artist’s autobiography feed into their artwork, and the artwork helps magnify their real-life passions and concerns. Mishima’s politics, sexuality, aspirations, and insecurities are viewed from different angles; the three narrative perspectives complement and enhance the entire act of exploration.

On top of all this, there’s Philip Glass’ music. Mishima has one of the most beautiful, hypnotic film scores of all time. 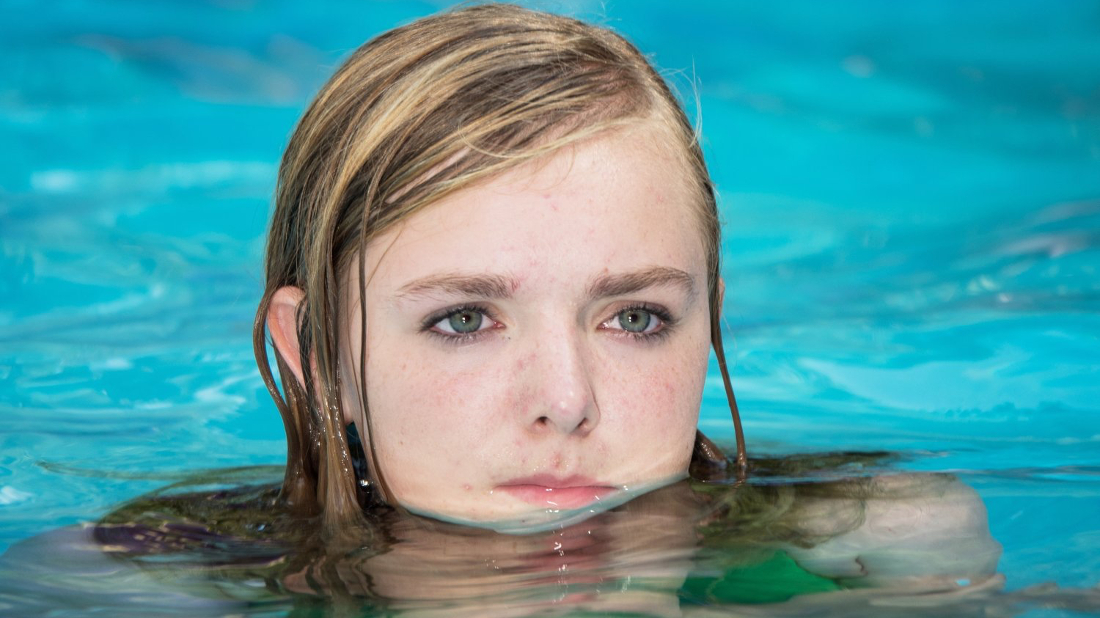 Eighth Grade is a modern coming-of-age classic. It’s a film so awkwardly lovable and earnest, but, most importantly, honest. Writer/director Bo Burnham and star Elsie Fisher capture the mortifying isolation of adolescence in all of its cringing, confused unpleasantness. If you were ever shy, lonely, or felt uncomfortable in your own skin growing up, you will find yourself in Kayla’s shoes. Eighth Grade is a lot of things, but like a lot of coming-of-age stories, I think it’s an adult attempt to turn back time, return to the awkward years, and offer your younger self the kind of compassionate, reassuring encouragement you wish someone could provide at the time. “Keep going,” the adult says to their younger self. “And whatever you do, keep being yourself.”

Burnham makes good use of zoom outs to help establish Kayla’s place in a scene and then emphasize her solitude amid the shining faces around her. While the diary would have been a traditional vehicle for voiceover narration in past coming-of-age stories, Eighth Grade updates the device through Kayla’s little-watched YouTube videos. As she shares her stumbling, homespun advice on confidence and being cool, we get the ironic counterpoint to her words. We have an idea of how to be ourselves in the abstract, but being ourselves when we’re unsure of who we are—and worse, what others will think of us—is one of the most difficult things about growing up. It persists well into adulthood; it never ends.

I think back to my own experiences in eighth grade and realize how much harder it would be for me if I were that age today. All the status anxiety about social media would drive me insane. But some things don’t change, like how hokey your parents are at that age. This is going to be a star-making film for Fisher, but Josh Hamilton also deserves praise for his portrayal of Kayla’s dad. He plays the role both the way adolescents view their parents (embarrassing and chronically uncool) and the way parents view their adolescent children in the best possible circumstances (with unlimited patience and love). 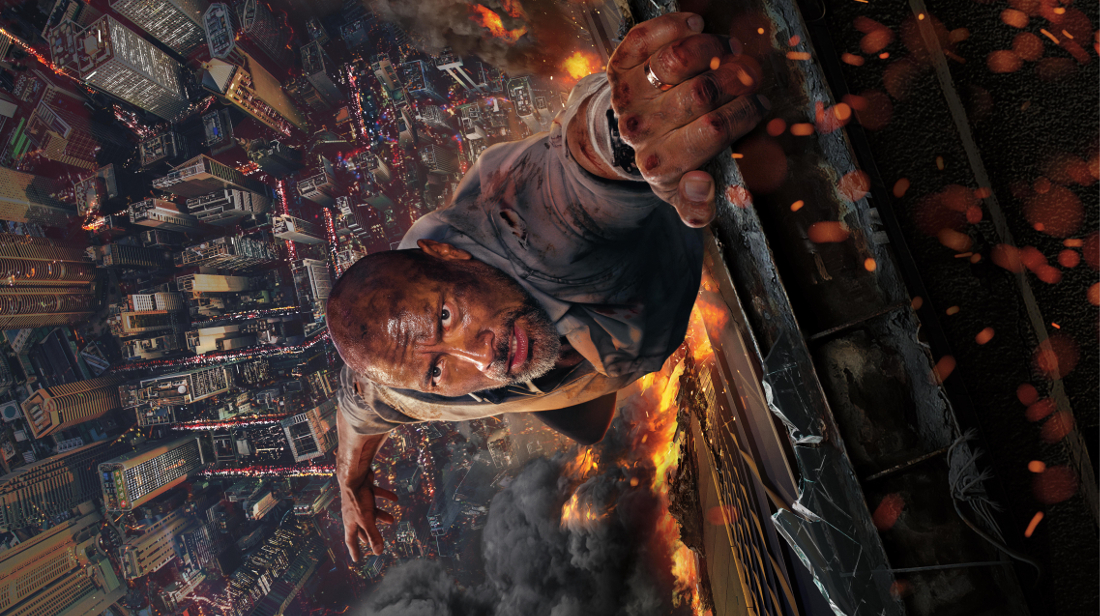 Skyscraper answers the question “What if Renny Harlin made the original Die Hard?” The answer is basically Cliffhanger in a big, dumb building in Hong Kong. And you know what? It works for what it is. Skyscraper is not that bad if your expectations are modest. It features some solid over-the-top action sequences, including a finale that borders on the hallucinatory. If anything, it’s better than Rampage (The 300 Week 18), a movie that felt like I had watched it before getting to the theater and that I have already mostly forgotten.

Skyscraper made me wonder how people view Dwayne Johnson as a movie star. He hasn’t had that iconic role that defines his screen persona, like Arnold Schwarzenegger (Conan the Barbarian, The Terminator) or Sylvester Stallone (Rocky, Rambo). The closest he’s come seems to be the swole braggart Maui from Moana. Maybe a case can be made for Hobbs in the Fast and the Furious movies, but even then, that character seems like a cipher for Johnson to show up and be charismatic without a well-defined action hero personality. 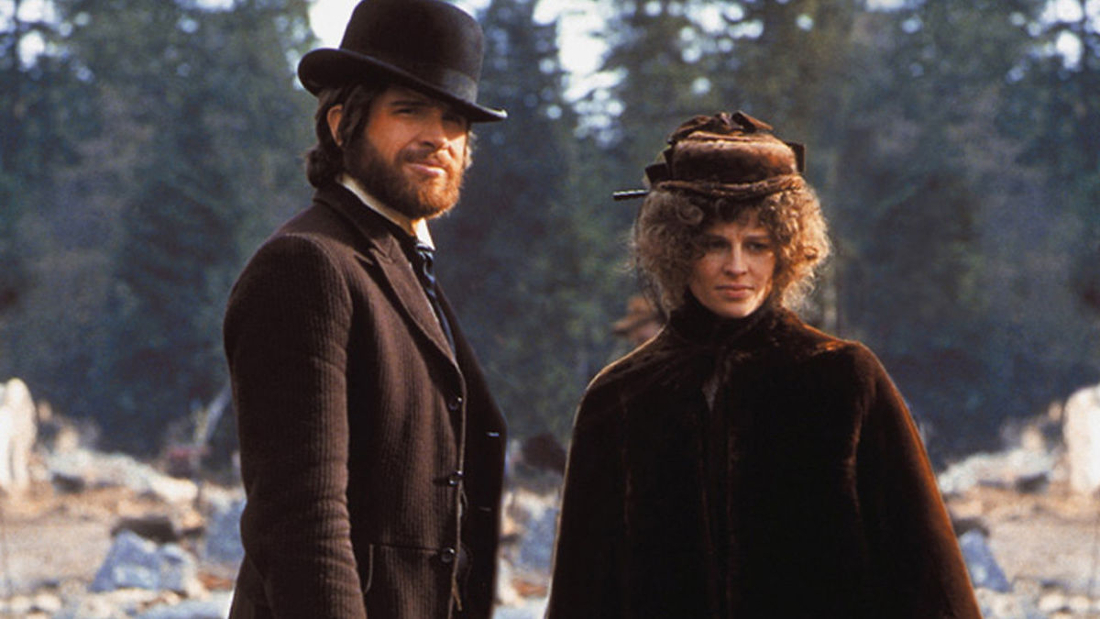 If Nashville (The 300 Week 18) is Robert Altman’s look at American sociopolitical tumult during the 1960s and 1970s, McCabe & Mrs. Miller could be seen as Altman’s cynical take on the foundational myths of America itself. In this gorgeously dour revisionist western, the frontier wasn’t conquered by ambitious heroes and heroines who got by on grit and ingenuity, but by conmen, cutthroats, and grifters who could cheat well enough until they were cheated by someone stronger. I was reminded of Ned Beatty’s famous monologue in Network where he likens the world to a business. Here capitalism and codes of masculinity lead with a macho posture and then fill you full of lead.

As McCabe, Beatty’s a mumbling gambler who’s all bluster and not much sense. He’s the great bullsh**ter, a quintessential American character. As Mrs. Miller, Christie’s got a fine business acumen running a brothel, but all relationships are merely transactional and nothing more. The town is called Presbyterian Church, but the holy building from which this outpost gets its name is only of symbolic importance. Even as the town grows over the course of the film, this settlement (like the characters, maybe like the country itself) is spiritually empty. I’ll be haunted by the hollow feeling McCabe & Mrs. Miller left me with for a while. 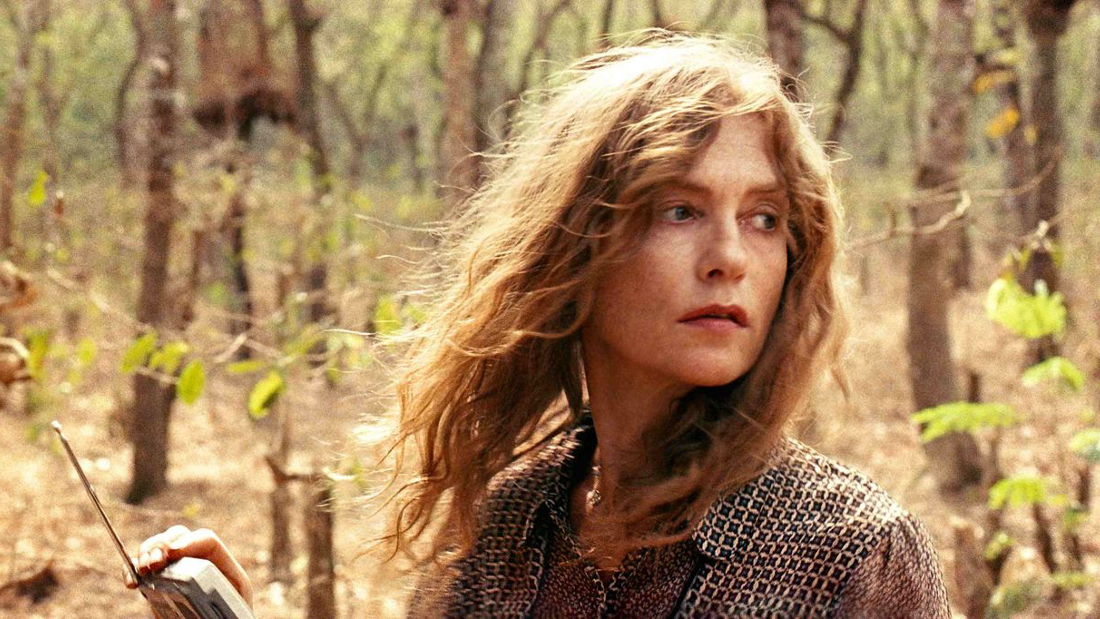 BAMcinématek is currently doing a series called On Whiteness. Partnering with Claudia Rankine’s The Racial Imaginary Institute, this series considers how movies depict white characters and what whiteness means when called to attention rather than being a default point of view. The movies explore cinematic depictions of identity, colonialism, politics, passing, and privilege, and also how the concept of whiteness is invisibly constructed, reinforced, or called into question in popular culture.

That preface helps ground my experience of White Material, which focuses on a rich white French family on an African coffee plantation during the first stages of a civil war. The jumps back and forth in time can be a little disorienting, but the movie is a mesmerizing exploration of power dynamics in colonized countries. Maria (Huppert) is both oblivious and wretched, trying to force people to harvest coffee as the nation slips into violence. One of the child soldiers of the rebellion refers to a discarded gold S.T. Dupont lighter as “white material,” the stuff of affluent colonizers that the oppressed don’t have access to. It’s fascinating to watch these signifiers of whiteness appear, disappear, and reappear throughout the film—a dress, a necklace, someone’s blonde hair—a sort of counterpoint to the ominous white smoke of war in the hazy mountainsides. White material is everywhere, and brought to prominence when its value changes hands.

I wonder what to make of Maria’s adult son Manuel (Duvauchelle). He’s introduced as a worthless layabout, but undergoes a mental break once his identity (perhaps his culpability and vulnerability as a white colonizer in Africa) is pointed out to him through the threat of violence. His half-brother is mixed-race, which implies an ugly backstory of rape and dominance in the household; in the half-brother’s class, we see an albino. White material, white skies, white skin, the stark whiteness of white—lots to ponder in Melville-like terms. I’m left wondering about the movie’s closing images, which are brutal and portentous. What does this smoke signify?