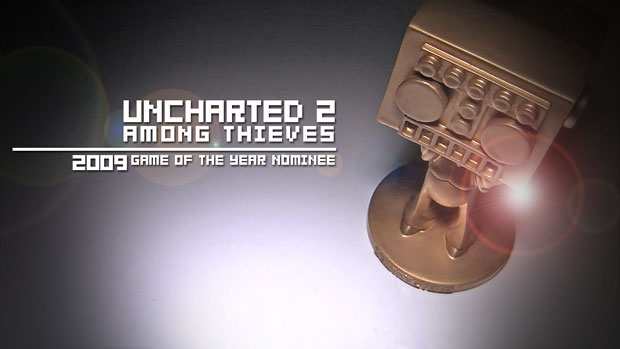 This morning Left 4 Dead 2 was unveiled as the first nominee for Destructoid Game of the Year 2009. Today it’s time to reveal the second! Since Rey put together a kickass video for each of these nominees — and there is a description of each choice after the jump — I am left with the tough job of making these introductory paragraphs interesting enough to keep people reading, but cryptic enough to not reveal too much.

So, with that being said, for today’s post, I am going to play a little round of Internet charades to see if you can guess the 2nd nominee before you hit the jump and watch the video. What? You say charades will never work over the Internet? It sounds like someone has never heard of the asterisk before!

Did you figure out our 2nd nominee? Hit the jump and watch the (amazing) video to see if you are right!

[UPDATE: Okay, I just realized the name of the second nominee is in the video label and in the header pic. Oops. Easiest guessing game EVER!] 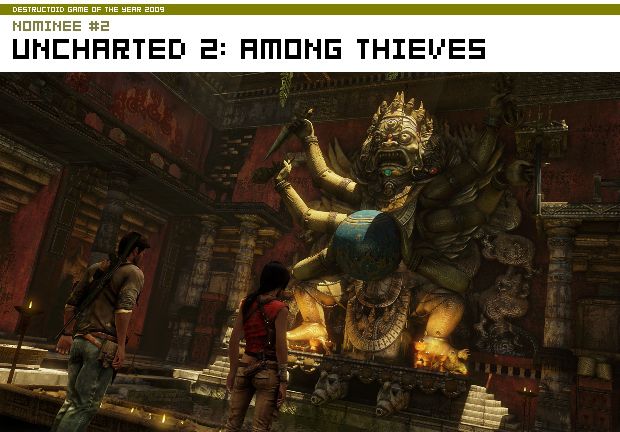 Despite being one of the most beautiful, polished games on the PlayStation 3, the original Uncharted (Drake’s Fortune) met with a somewhat polarizing reaction. Almost everyone loved the game’s unparalleled action game presentation, but some were turned off by the repetitive nature of the sometimes tiresome shooting gameplay.

While most of the same gameplay styles are intact, the sequel, Uncharted 2: Among Thieves, is such a gigantic improvement on the original game that you almost can’t compare the two. Uncharted 2 again follows hero Nathan Drake as he embarks on a breathtaking quest through numerous, increasingly thrilling set pieces in an effort to discover a mythical fabled treasure. Along the way, Nathan interacts with many characters (both old and new), each featuring some of the best voice acting ever heard in a videogame.

A lot of people are comparing Uncharted 2 to a topnotch action movie, but that is not doing the videogame enough justice. Sure, it could easily pass for one of the best Hollywood has to offer, but it is so much more than that. Uncharted 2 is one of the most exciting, perfectly paced, exhilarating pieces of entertainment produced in the last few years. An action movie only wishes it could be half as great.

From our original review: “It’s not hyperbole to say that to date, the single-player campaign mode in Uncharted 2: Among Thieves is the best, most exciting action/adventure game you’ll ever play.”

“If you own a PlayStation 3, Uncharted 2: Among Thieves belongs in your collection, no questions asked. If you don’t, know this — there’s no other game in its genre that even comes close to it on any other platform. Whether or not that makes Among Thieves the system-seller Sony’s been looking for remains to be seen, but it’s without a doubt among the best exclusive games found on any console this generation.”

What do you think of our second nominee? Do you like Uncharted 2: Among Thieves? What other three games do you think are going to make up the list of final nominees? And, again, let’s all give Rey a hand for producing these amazing videos.

Don’t forget to check back tomorrow for the reveal of the 3rd nominee for Destructoid Game of the Year 2009!