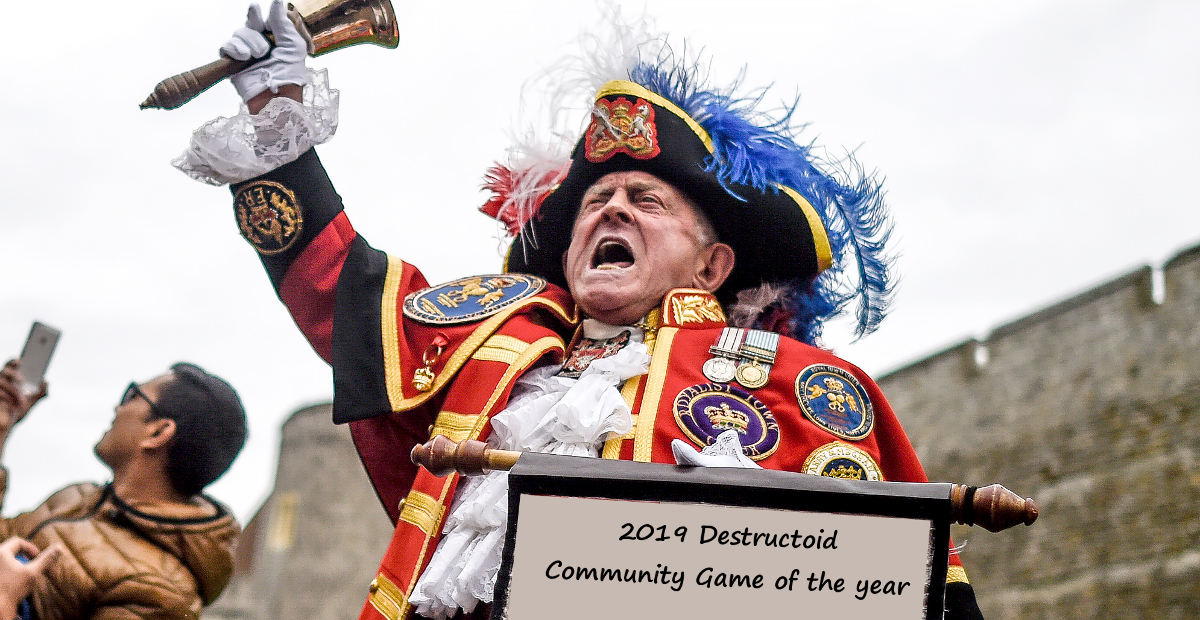 What a year 2019 was! It’s been a while since I’ve seen so many diverse entries come up as real contenders for game of the year. From an Estonian police RPG, to a game about a mischievous goose, if you couldn’t find something to love in 2019, then check your pulse – you might be dead.

With all of these great games out there, it’s imperative that everyone got their voice heard, and hear you we did. The votes have been tallied and the results drawn up, and as per last year, I solicited the words of fellow Destructoid community members and managers to write about the games that won.

So without further adieu, I present the Destructoid Community Game of the Year selections!

In fifth place is Death Stranding, a game I am patiently waiting to release on PC so that I can feel the warmth of digital Mads Mikkelsen on my face as I fall asleep on my monitor with his words whispering into my headphones. Don’t judge me!

Community member FrostyFlakes spoke of how even a simple act such as walking was enjoyable in Hideo Kojima’s first game as a free man:

Few games in recent memory have made simple movement an exciting mechanic quite like Death Stranding. Ferrying packages from one beleaguered city to the next requires the player to be methodical and patient. Walking carries with it a ton of considerations: the amount of weight you’re carrying, how it’s stacked, how you shift your weight and how fast you’re going, even the terrain you’re walking on. It’s an endurance test of sorts with each step being a thin line between handing that cargo to the recipient or watching it tumble down a mountain. Throw in Kojima’s lovable sci-fi shlock (I mean there’s a character literally named Die-Hardman) as well as the breathtaking vistas and I’ve never been happier to call myself a delivery boy.

Barely edging out Death Stranding by one vote for fourth place is my personal second-place choice for GOTY, Super Smash Bros. Ultimate. (It missed our 2018 Game of the Year voting cutoff date.) The party fighting game deserves all the praise it has gotten heaped on it for the past year and shows no sign of slowing down or losing its popularity in the fighting game community scene.

I looked into a mirror and shoved a potato on a stick in my own face as a microphone and had this to say about the game:

It’s a testament to how good the Super Smash Bros. series is that whenever one is announced, I tell myself I’m not going to buy the system just for it. Then come release time I end up buying the game and losing hours upon hours of myself to it. Ultimate continues that trend with its expansive roster, tweaking of old characters, oddly addictive side games, and the same competitive couch fighting that I’ve been playing for over 20 years. I’ll admit that I was scared to think about what having every character back would mean for balance, but then I saw that my boy Ganondorf finally ascended to the rank he deserved to be at, so who am I to complain?

Does the game reinvent the genre or even the series? No, not really, but Ultimate feels truly ultimate in that it’s everything a longtime fan such as myself has wanted. In a way, I’d be happy if this was the last game because it’s just so damn good. After a few missteps (looking at you Brawl), the series is exactly where it needs to be. DORIYAH!

Fire Emblem: Three Houses became my comfort food of games late this year. There’s something about diving into combat, weighing your options, and executing them that feels downright good when everything goes right. The community here has been yelling about it all year, and they’re not wrong. It’s a great fucking game that’s more than worth your time. At least, as long as you chose Black Eagles because the other two houses are total scrubs. *dabs*

Second place goes to From Software’s Sekiro: Shadows Die Twice, a grueling game you either learn to adapt to or – in the case of TheLimoMaker – causes you to have a freakout on Twitch in front of all your internet friends. I’ve been holding off until I get a better PC, but I hate to admit that seeing so many people bounce off Sekiro‘s intense gameplay only makes me want to play it more.

Resident sexy pants and community manager Nekro spoke on why they loved the samurai action game:

Despite what Kevin may claim, Golden Deer is clearly the superior house. Silly!

Sekiro: Shadows Die Twice is a game that forced me to completely reevaluate how I play Souls games.

As someone who has allowed the Souls series (alongside Bloodborne) to consume hundreds upon hundreds of hours of their lives, I’ve come to rely on a play style that hinges on quickly darting in and out of the action, and taking shots whenever I could before escaping to relative safety. Within an hour of booting up Sekiro, I realised that my tried-and-true tactics would have to evolve and change. For the first time since I began playing this series, I’d have to try a completely different approach.

On paper, this may sound frustrating. But after finding Dark Souls III to be a little on the easy side, I was starting to wonder if From Software could truly throw me off balance anymore. And because I was so quickly pushed out of my comfort zone, forced into a situation where I knew I was at a disadvantage, overcoming these odds once again felt just as satisfying as it did when I first picked up the original Dark Souls all these years ago.

A game that can make you feel so triumphant when you finally best a foe that’s been kicking your ass for hours on end has to be doing something right, after all.

Finally, we come to the big reveal. Can you feel it creeping in the wings? It’s always there, lurking just around a corner, ready to pop out and deck you in the face while wearing a silly hat and trench coat.

You guys loved the hell out of this game. It doubled the amount of votes Sekiro got for an absolute crushing victory. Being a weenie hut junior patron myself, I stay as far away from horror games as I can, but community manager StriderHoang praised the game up and down:

Everything about Resident Evil 2‘s design is tight when you get down to it. From managing ammunition, killing chunky zombies, and having spatial awareness of what’s around you, everything is involved in your relationship of survival in Racoon City.

As someone only recently getting into the Resident Evil series, it’s no wonder longtime fans will reference specific places as if they were native citizens of Racoon City itself, talking about locations like S.T.A.R.S. office and the evidence lockers.

But probably my favorite thing about Resident Evil 2 is how timeless it feels no matter how often you play it. Your first time through will be an experience in horror and tension, but repeat playthroughs are still fun long after you get familiar with zombie number four who appears at that one specific blind turn. Normal playthroughs eventually give way to speedruns and challenge runs, and the tension of it all remains despite acclimating to the horror.

There you have it, another year in the books. I’ll be sorting through the second question – your favorite game you played for the first time in 2019 – over the next few weeks to see if any trends can be gleaned. In the meantime, peep the final results and punish yourself for letting Tetris 99 sink so low.

Mad props to whoever voted for Wes’s Pristine Anus for GOTY, ya got me good.

Thank you as always for voting, reading, and continuing to be the best community on the internet. May your 2020 be great and your frames per second always high.