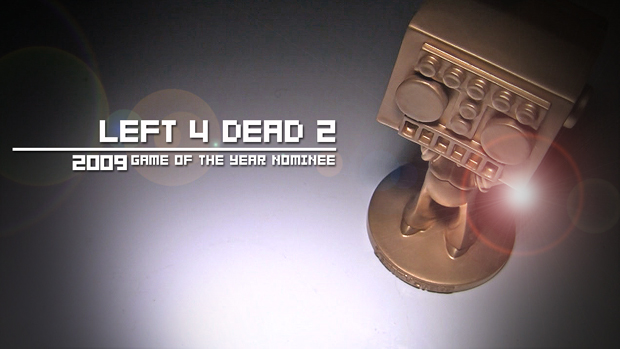 During the holidays, it has been said that every time a bell rings, an angel gets its wings. On the Internet, you can replace “bell rings” with “videogame Web site posts a ‘best of the year’ list” and “angel gets its wings” with “argument begins.” Despite the fear of people not agreeing with our opinions, we have chosen to brave the rough waters of angry comments and appease the list gods by releasing the official nominees for Destructoid Game of the Year 2009.

It was a tough year to decide on five nominees to compete for our coveted Game of the Year award (previous winners: BioShock and Left 4 Dead). Not because there weren’t enough good games to choose from, but our list of favorite games of 2009 was a lot longer than five. It was tough to narrow down the list to just five nominees.

All this week we will be revealing the five nominees, one a day (well, two today since yesterday’s post exploded), until the actual winner is revealed next Monday (12/21). To accompany each reveal, video editor Rey Gutierrez has put together individual videos that really need to be seen to be believed. You are not ready.

But enough of this crazy talk! Watch the above video and hit the jump for our 1st nominee for Destructoid Game of the Year 2009! Let the bells ring! 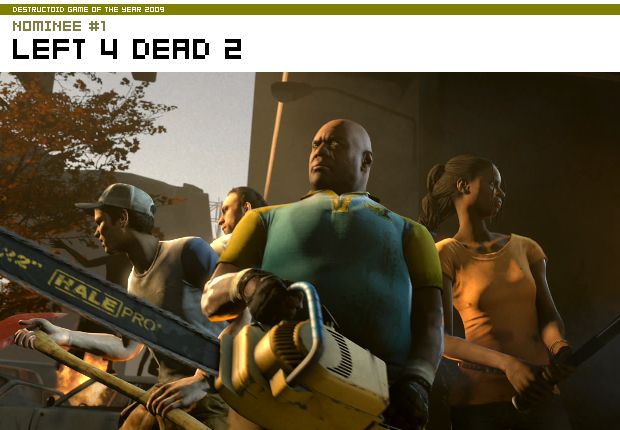 The original Left 4 Dead won the title of Destructoid Game of the Year last year, so unless the highly anticipated sequel turned out to be an absolute train wreck of a game, it was pretty much guaranteed to be a nominee this year.

Lucky for us, Left 4 Dead 2 turned out to not only be great, it is actually a marked improvement on the original! With more zombies, new playable characters, cooler weapons, and brand new inspired setting, Left 4 Dead 2 is one of the most entertaining gaming experiences of the year! The revolutionary multiplayer experience that took the gaming world by storm in 2008 is back and better than ever!

From our original review: “This seems to be the driving force behind Left 4 Dead 2 — taking everything that was created in the first game, and seeing how versatile it is, playing around with it and extracting as much gameplay as possible from a fairly simple concept. In this endeavor, Valve has triumphantly succeeded. Left 4 Dead 2 manages to constantly throw curve balls and new ideas at the player, despite the core gameplay having changed very little. The situations the Survivors find themselves in — be it escaping from a burning hotel or navigating a dangerously cruel storm — are constantly changing and each campaign has an incredibly distinct look and feel, bringing their own special challenges. Whereas Left 4 Dead 1 felt like the same game throughout every campaign, Left 4 Dead 2‘s five campaigns are so individual that it feels like five completely unique experiences.”

“Left 4 Dead 2 is, overall, a terrific way to follow last year’s game. The original premise has proven more versatile than I ever would have imagined, and the new modes, new Infected, new Campaigns and new items make it feel like a completely different experience. What’s more, the Southern setting has made the game even scarier, with the redneck look of the Infected creating a more unnerving bestiary of creatures to contend with. Ultimately, this game is bigger, better and more crazy than the last, and if you loved the first game, you really do need to pick it up.”

What do you think of our first nominee? Are you a fan of Left 4 Dead 2? What other four games do you think are going to make up the list of final nominees? And how freakin’ incredible is Rey’s first video?

Don’t forget to check back later today for the reveal of the 2nd nominee for Destructoid Game of the Year 2009!