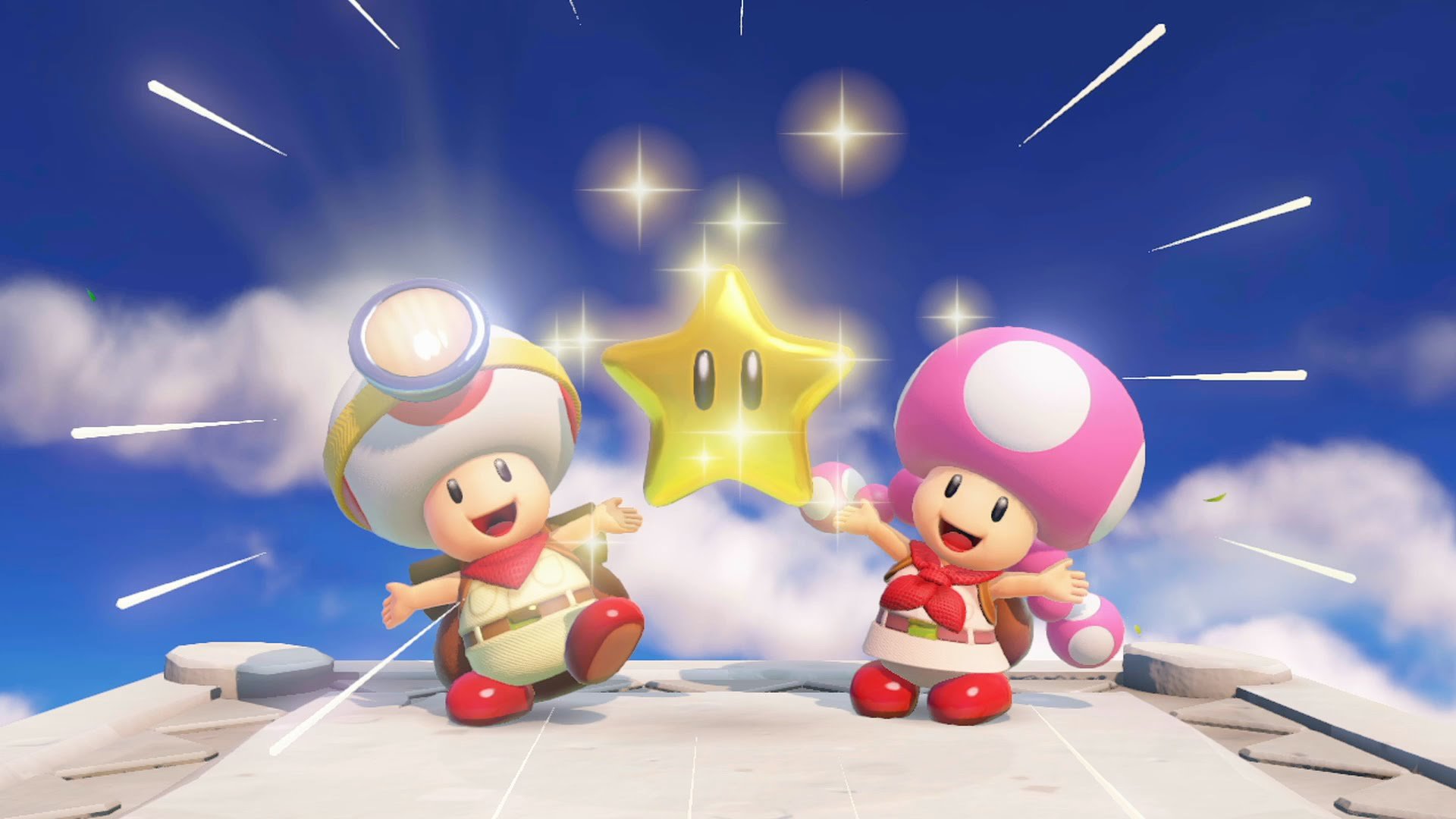 [Sam van der Meer is here to talk to you about mushrooms. No, he’s not referring to psychedelic mushrooms. We’re not here to talk about something that might prompt you to run around at midday in a public park, wearing only your underwear, while laughing hysterically, scaring every innocent family around you. There may or may not have been seven cops chasing you too. Who really knows, in this most hypothetical of situations?

The important thing to remember here is that these are completely wholesome, totally-not-drug-related mushrooms that just happen to be in video games. There’s definitely nothing illegal going on here, I swear. – Kevin]

So, I was making quiches (as someone who essentially eats once a day for dinner, an entire six-inch-across quiche is something I will personally and entirely devour, prompting those “quiches” for other members of my household.) the other night, which is in itself a bit of a lie. My mom, bless her, makes the crust. I can’t bake for diddly. I do the eggs and cheese proportions and the caramelized onions …

and saute the mushrooms.

That’s literally the impetus for this list you find yourself currently ensnared in. You’re trapped in my mire of absolute nonsense yet again, yourself and that itchy trigger finger of yours the only ones to blame. But, also sort of a lie, I recently started Dragon Quest XI S: Echoes of an Illusive Age – Definitive Edition (“Say my name”) and came across these devils, which got the ‘ol noodle thinkin’.

And, you know what happens when we let Sam think.

But really, mushrooms. I like to eat them, and I like to look at them. I also like video games, and it just so happens that video games feature a whole lot of great mushrooms. So, without further ado…

The Ramblin’ Evil Mushroom from EarthBound

I mean, you didn’t think I wouldn’t mention EarthBound, did you? Especially when we’re talking about mushrooms in video games (for some reason; I’m so sorry) and especially when my beloved features one of the more iconic fungal fiends in gaming. The Ramblin’ Evil Mushroom is a jerk, straight up. It gases you, like many of these shrooms do, and inverts the heck out of your controls.

I’m not going to make this post any attempt on my part to dissect video game theory — as if I could come up with one! However, the Ramblin’ ‘Shroom’s reversal of your controls is sort of in keeping with EarthBound‘s MO, no? For a game that so often reaches beyond the confines of the screen, nudging the player directly and addressing the irony of it all, an enemy who directly affects player control is pretty fourth wall-breaking, I’d say.

Super Mushroom from some game

Stick around these parts long enough and you’ll start to realize Nintendo has quite a fondness for fungi. Look, this is about as obligatory an inclusion as you’re bound to find in a list about mushrooms in video games. Mario’s iconic choice of sustenance and the player of just about any Mario title’s eternal aspiration, the Super Mushroom is the King of All Mushrooms. The Don of Champignon.

The sheer recognizability of the Super Mushroom is something I think most artists and multinational companies would dream of, with mushrooms at large associated by many with our favorite Japanese Italian plumber, who is in turn tantamount to thinking of Nintendo.

There’s also something remarkably comforting about the Super Mushroom’s singular motivation. Entering this world and charging ahead, whether it’s directly into Mario to be gnashed and digested, or off of a cliff into that final rest. The Super Mushroom doesn’t give a fuck about things, and in this climate of political tomfoolery and Reese’s Pieces put inside Reese’s Cups, sometimes one can only move forward with a happy-go-lucky attitude of apathy. We should all strive to be a little more Super Mushroom.

Second Cousin Kinoko from We ♥ Katamari

The Katamari Damacy games are factually among the greatest things the medium has given us. They blessed us further with Kinoko, everyone’s favorite second cousin who first appeared in We ♥ Katamari. She’s great, really. A really dry wit at parties and generally someone who doesn’t try to put on an act for public appearances, but not pretentious or anything. She also loves Bowie and makes a great chocolate chip cookie. Kinoko is the kind of second cousin you actually gravitate towards when you hit a funeral or other big family event.

Speaking of Katamari, shout out to the Space Mushroom planet in general, the gathering place for The Prince and all his cousins. They just hang there. On a mushroom.

Fact: I have not played either Mushroom Men: The Spore Wars or Mushroom Men: Rise of the Fungi. Also fact: I’m perusing eBay in an effort to add to my backlog in order to right this egregious wrong.

Did you know Les effin’ Claypool did the score for Mushroom Men? How wild is that!

I digress. (Do I really though?) Pax is a mushroom protagonist in a game series that includes the word “mushroom” in its very title. Of freaking course he’s on this list. Look at ‘im! … It’s about all I can say in trying to flesh out this chunk of this failed comedy sketch that is my life. I haven’t played the games. Pax might be a jerk.

Clickers from The Last of Us

“That’s cheating, Sam, clickers aren’t really mushroom people, really … ” might be something you’re thinking. Oh, I’m sorry, did you exclude the horrifyingly-mangled victims of cordyceps? Oh, sorry. Your list about the Greatest Mushrooms in Video Gaming must be so much better. Please! Let me learn from your list.

But, actually, clickers are some of the best enemies to come about in all of the seventh console generation. This is the first time I’ve thought that, but yeah, I’m sticking to those words I just typed. I don’t even love The Last of Us. Although, I am eager to try to learn to love it with a replay, “soonish.” Still, the clickers are instantly iconic. They’re creepy, man. They’re the remnants of a person overtaken by shrooms. Don’t do drugs, kids!

Puffstools and Mushroom Pikmin from Pikmin

I have a real traumatic past with these guys.

Here I am, a veritable child (physically, at this time, not just mentally) playing Pikmin. Havin’ a ball, as one does. Along comes a puffstool in Olimar’s path. Alone, without our pikpik-looking compansions, we approach. The puffstool huffs and puffs and releases its spores to no effect. “Neat!” I say to myself, and go about my business.

Returning, pikmin in tow, I approach the puffstool. It huffs and it puffs and good lord, they’re killing me. They’re killing me. The puffstool’s spores, so obviously filtered by Olimar’s suit, induce a catastrophic effect upon my complicit companions, transforming them into “mushroom pikmin.” These pikmin, deranged and zonked out of their little freakin’ minds, turn on Olimar in a PCP-like haze of adrenaline and bloodlust. It’s pretty wild.

Is he a mushroom? Is he a he? For our purposes, I won’t pigeon-hole that glorious blue stallion into a single gender. Also, for our purposes, the Celestial Emissary is a goshdarn mushroom because I say she is.

I mean look at him! Look at all of those little mushroom guys she sends out at you! Droves of little mushroom men and women, just swingin’ and pawin’ at you because they’ve just gotta defend their god!

So, I’m not going to lie, it’s been about five years since I played and loved Bloodborne. Any semblance of comprehensive lore-lookin’ has left my brain via the left-eardrum, so as always, I’m riffin’ here. It’s a vague memory, but you know what? That’s a big alien mushroom friend-o (except not), and she’s speakin’ to me.

Also, definitely a cousin of:

Every Darn Mushroom-thing in Hollow Knight

Hollow Knight‘s aesthetic is just the best thing ever — glad we can agree — and all of the Fungal Wastes are positively ripe for this list. Could I just say “the Fungal Wastes are one of the ten greatest mushrooms in video games?” Sort of like Ego? Just a big, collectively-sentient mass of mushrooms?

Anyway, yeah, the mushrooms in Hollow Knight own. Look at those guys! They’re gonna hurt you only because you violate their home. Mushrooms look out for other mushrooms.

Then there’s Mister Mushroom, the mumbling-grumbling macguffin of Hollow Knight‘s multiple endings. Hollow Knight is too good. It’s too powerful.

Alright, that’s it. Sorry for wasting your time.

[*I started to write this up before the world started to go totally screwy, so if that does or doesn’t say much about how utterly insignificant a post this is, I’m glad it did or did not help!]