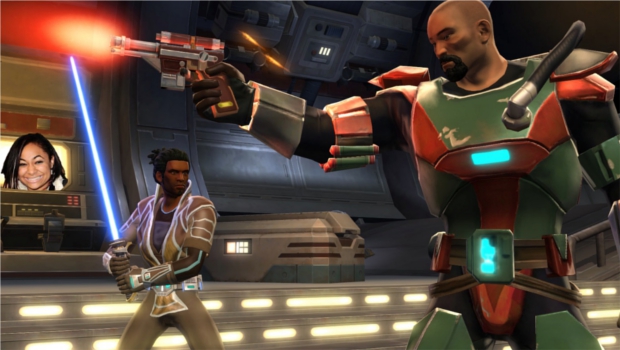 Hello persistent friends! I’m back in action after a week away working at Comic-Con. It was fun and exhausting geeking out in San Diego, snapping pictures of Mark Hamill signing $100 autographs and trying not to be crushed by sweaty cosplayers dressed up as the cast of Glee. So, what did we miss? Let’s investigate. Without further ado — there’s games to pursue!

“Death of a Galaxy. Birth of a Republic.” The big MMO story out of the past week and a half has to be Star Wars: The Old Republic and BioWare’s info overload stemming from their appearance at San Diego Comic-Con 2011. Not only did we get Pre-Order and Collector’s Edition details, we were provided with a narrowed release window of “Holiday 2011.” If that wasn’t enough, we also learned of Beta Weekends coming this September with a promise to invite “thousands” of fresh testers. We were also shown new Flashpoints, sexy new speeder bikes, Companion Character customization options and much more. Barring any disasters – The Old Republic is launching this November. That’s my highly-educated guess. Thank me or laugh at me later.

“PvP promises” ArenaNet, makers of the hotly-anticipated Guild Wars 2, are promising big reveals for their upcoming appearance at Germany’s gamescom (August 17-21.) In addition to all seven professions, the Sylvari and Asura character races and the Charr starter experience being playable – the devs will be unveiling PvP for the first time. Whew. If you are anywhere near Cologne you need to get to gamescom and make war on some guilds. If SWTOR has a prime competitor it’s certainly GW2. It’s going to be an interesting Holiday 2011 sales battle for fans to watch unfold.

“Clan slam!” Jagex has launched the Clan Citadel system for their long-running, immensely successful MMO Runescape. Clan members now have access to customizable, floating Clan Castles and new Clan Battlefields which can be used “to generate their own gameplay.” Clan Citadels can be upgraded a full seven tiers with unlocks such as travel portals and a dragon perch for your very own Clan Dragon available. Jagex are certified masters at shoving a whole mess of Java programming into our little overworked browsers.

“The fires of Isengard will spread” The next big expansion for Lord of the Rings Online, “Rise of Isengard,” is fast approaching its late September launch. Players will be soon be able to advance to level 75, visit three new regions including the Gap of Rohan and stumble their furry Hobbit feet into the 24-player Draigoch raid. Those keen enough to Pre-Order will be showered in fancy extras including XP Boosts, a Rohirrim Style Mount and preferred Beta access (which began on Wednesday.) Isengard isn’t just for naughty old wizards anymore.

“Myth Information” HanbitSoft’s revamp of free-to-play hack ‘n’ slash MMO Mythos is cutting a path toward fun with the addition of a new PvP arena system. The latest patch has also raised the level cap from 50 to…wait for it…51! Now, that is Myth management!

“Wet ‘n’ Wild” Rift’s Update 1.4 “Legacy of the Fallen” will be diving in soon and features an “epic” Water Saga quest series wherein players lock tridents with the Abyssal for a chance at fresh loot drops which may include a Crocnard Mount (a dinosaur/crocodile half-breed.) Players will also visit the Drowned Halls, another liquid lair, where you’ll face off with the faceless sorceress Hydriss. In related news, Rift’s head honcho Scott Hartsman has been complaining to industry mag Gamasutra about unscrupulous gold farmers and their evil, credit card-stealing ways. Harstman says CC theft is more common than many might believe. To the depths with them!

“Earth Abides” Raise your hand if you remember the cute, anthropomorphic MMO Earth Eternal — a free-to-play title that died before leaving Closed Beta. Damnit, am I the only one with my hand up again? This little-known title featuring a veritable zoo of animal races, such as fox and bear, is back (under the new ownership of TurnOut Ventures.) If you like your playable races covered in fur and sporting claws you’ll want to investigate the new Beta.

“The spirit of Ensemble compels you!” Microsoft is set to launch Age of Empires Online in just a few short weeks (August 17th.) This fine, free-to-play RTS will remind you more of Age of Mythology (minus the insane God powers) than AoE III. My time spent in the Closed Beta was very enjoyable and this new, persistent version is shaping up to be fun and polished. Opinions vary on the cartoon-like visuals but I absolutely adore them. The words “Disney and “Blizzard” come to mind. Best of all – the game plays well. Highly-recommended.

OK, MMO masters and mistresses, that’s going to do it for this time around. I’ll see you back here next week with more MMO news than a +4 Bag of Holding can hold. Keep it logged-in.