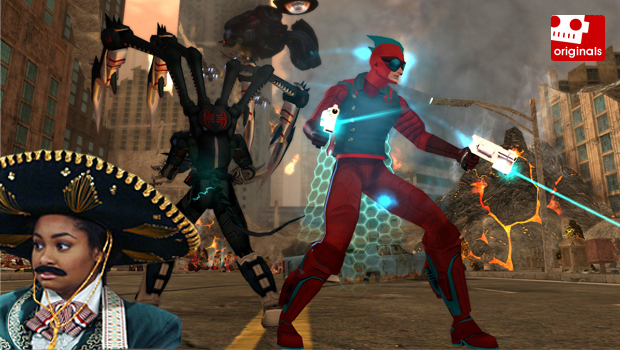 Hearty October greetings to you and yours and welcome to another scintillating collection of massively multiplayer news & views. Let’s reach deep down into our weekly Bag-of-Holding and pull out some especially sharp bits!

“Liberate your wallet” NCsoft’s seven-year-old superhero MMO City of Heroes is now free-to-play. The re-branded City of Heroes Freedom allows players to create two heroes from eight character archetypes, adventure up to level 50, access 45 zones, and run over 1,000 missions — all without cost.

Along with the change to F2P, developer Paragon has propped the “Issue 21: Convergence” update which brings a new First Ward zone, a giant monster to face off against, a Time Manipulation power set, and fancy new costumes.

While you can play Freedom “forever” without incurring costs, if you want to actually run missions in First Ward or create more than two characters, you’ll need to provide some cash. There’s always a price to pay for liberty isn’t there, friends?

“Ash bash” RIFT‘s content patch 1.5, “Ashes of History,” is live on servers. AoH offers up a new Chronicles System, Planar Attunement (for advancement beyond level 50), a new Library of the Runemasters PvP warfront, and in-game rewards for Veteran players. The longer Veteran players have been subscribed the better the phat lewtz on offer. New events are also forthcoming including a three-part epic which will eventually lead to a new kingdom. Smokin’!

“End Run” Trion World’s MMORTS End of Nations has been delayed into 2012. Free-to-play EoN features futuristic tank and Mech battles which unfold across a persistent global map. While any release date slippage is sad news for fans, somehow 2012 seems ironically perfect for a game promising the “End.”

‘The Saruman Plan” Turbine’s large and lovely “Rise of Isengard” add-on is now available for purchase for players of The Lord of the Rings Online. RoI provides three new regions; Dunland, the Gap of Rohan, and Isengard; a level cap rise to 75; a new 24-player ‘Draigoch” Raid; and oodles more. Fresh quests, skills and deeds await those ready to hop to the Misty Mountains. Grab your cloaks, folks.

“Choco-Blow” Speaking at a Tokyo press conference, Square Enix CEO Yoichi Wada has acknowledged that the company’s much-maligned Final Fantasy XIV has greatly damaged the brand name. Even though the MMO has just “celebrated” its one-year anniversary, upcoming patch 1.19 has been slightly delayed and Wada says the dev team is hard at work “re-doing the game.” Hopefully this isn’t the Final straw for subscribers and they’ll continue believing in the Fantasy. See what I did there?

“A Mighty Wind” The second chapter in Guild Wars’ three-part “Winds of Change” update has gone live. This chunk o’ Change (or “multi-stage storyline”) brings Ministry vs. Brotherhood violence, 11 new quests, five new respawn zones, and intriguing “hidden scenes.” All this goodness is intended as a bridge to Guild Wars 2 which should arrive … someday.

“Without a hitch” Developer Tiny Speck has launched fresh and funny Flash-based MMO, Glitch. Within Glitch, players are figments of a giant’s imagination (how’s that for an unusual class?) and can “grow and shape the world … collaborating or competing with everyone else in one enormous, ever-changing, persistent world.” It all sounds rather bizarre and worth exploring.

A new MMO makes its debut. A long-awaited MMO is delayed. Another MMO goes free-to-play. Whatever’s coming up next week? Yep, you guessed it — more of the same! Until then, have a frosty mana potion on my tab and keep it logged in.

David Moore co-runs torwars.com, a site focused on all things Star Wars: The Old Republic, and has run the site gamebunny.com for the past ten years.