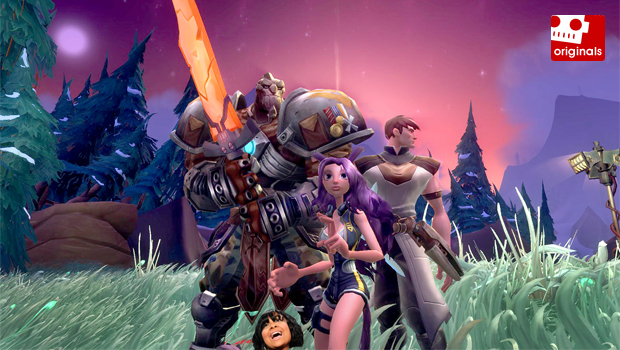 Hello MMO connoisseurs and fellow cheese enthusiasts. How goes the raiding and invading? Gamescom 2011 is underway in Germany and exciting details are streaming out of the land of the Beer Garden. Let’s drink it up!

“Carbine Unloads” Carbine Studios, formed by industry vets from games such as WoW, Fallout and Asheron’s Call, has finally unveiled the MMO they’ve been slaving away on since 2007. WildStar sports a highly-stylized, animated film look, is set on a sci fi/fantasy planet called Nexus and features Esper (mage), Spellslinger (rogue) and Warrior classes. Most intriguing, any class can chose a specific Path to follow, such as Soldier or Scientist. I’ll be happily tramping around on the Explorer Path which rewards players for seeking out hidden points of interest and placing tracking beacons. Yes, that is my idea of fun. Don’t mock the Explorer!

“Hutt, Hutt, hike!” BioWare is out in force (pun cringingly-intended) at Gamescom 2011 and are showing off the just-revealed Huttball Warzone for Star Wars: The Old Republic. Huttball comes across as a melding of Unreal Tournament’s Bombing Run with the off-the-wall fun of Monday Night Combat. Will this be BioWare’s first eSport with ladders and international competition? Also on display, and in the hands of a few lucky gamers, are runs through the endgame Eternity Vault Operation/Raid. Let the “Force Wiping” begin!

“War Report” Gameplay details and enthusiastic hands-on previews for Guild Wars 2 are spilling out of Gamescom. G4tv describes an exciting endgame battle with a huge bone dragon that spawns undead creatures. They also enjoyed character Origin stories with long-term consequences such as NPC friends that helpfully return in later quests if you chose to save them early on. Game Informer likes how new skills dynamically update after using weapons for a brief time–with no need to visit a trainer. Fast-moving characters that don’t need to stop while flinging spells and firing off weapon skills is also pinpointed as something to love.

“Falling Up?” Adventurine are changing and polishing so many aspects of the pvp-based title Darkfall that the company says it’s “a new game created on top of the current game rather simply an expansion,” and has dubbed the remake Darkfall 2.0. When the spit and polish has been applied (a re-launch date has not yet been announced) the re-jiggered game will feature more “tactical” combat, brand new Loot Tables, a completely changed World Map, a new GUI, improved visuals, a Crafting System overhaul, newbie training missions and on and on. Will this polishing in the ‘Dark bring in a flood of new players? Stay tuned.

“Taking ‘Wing” Blizzard has begun dripping deets for what’s coming up in World of Warcraft‘s Patch 4.3. Hold onto your Leather Clogs of the Monkey kids, it’s finally time to go hammer-to-snout with Cataclysm’s main baddie Deathwing. Much standing in the fire is sure to ensue. Also, on tap are new Ethereal abilities used to transmogrify armor. After seven years, players will now be able to continue wearing sexy but low level armors and imbue said armor with Epic, high level stats. Too bad we’ve all long-since vendored our Lightforge Spaulders to free up bank slots. Lastly, Blizz co-founder Frank Pearce has emphatically stated that there is no StarCraft MMO under construction and no plans to begin doing so any time soon. Zerg crushed!

“Any excuse to party…” Because it’s never too early to begin celebrating yourself, Trion is about to throw Rift a Six Month Anniversary party (the game launched March 1st.) From August 25 to 31, the party table will be set with goodies such as “ramped-up XP and Prestige gain for subscribers” and former players, as well as newcomers, can play for free–leveling as high as they can manage. Party prizes are also promised for all celebrants. (Insert party favor blower sound here.)

“Cheap Brick” A free-to-play version of LEGO Universe has now launched. All you’ve got lose is a bit of time and, who knows, you may find yourself pleasantly enthralled by this fun-for-all-ages MMO. Beware though, while you can play as long as you’d like in the “F2P Zone,” you are limited to creating a single LEGO hero and only have access to two Adventure Zones. Click clack. Snip snap!

“Empire Building” Microsoft’s free-to-play Age of Empires reboot is now live and ready for love. I’ve mentioned before how much I enjoyed Age of Empires Online in Beta and I’ve gotten stuck right back in with a sneaky two week head start thanks to being a tester. Would you like to get all up in my base and kill my dudes? Well, let’s get it on you geeky Greeks!

That’s another week done and dusted my friends. I need to quaff a six’er of ancient elixirs and get back to gaming. Keep it logged-in.