I know I read that the next Yakuza game was a zombie game, but every time I tried to process that information, my mind blanked out, unable to even comprehend the concept. Now that I’ve seen Sega’s TGS presentation thereof, I’ve retained enough coherence to type this post, aided by the trailer you see above.

For starters, the game is still set in iconic Kamuro-cho (a fictional version of Tokyo’s Kabuki-cho nightlife district), though now it’s mostly ruined thanks to an outbreak of the living dead. Series protagonist and half-man-half-stone-golem Kazuma Kiryu must now brave the zombie-filled streets with Ryuji Goda (of Yakuza 2), Shun Akiyama (of Yakuza 4), and Goro Majima (Kazuma’s rival) to…do things.

Yeah, do things. The presentation wasn’t too clear on the overarching plot, though cutscenes and high-profile talent casting at least some of the series’ characteristic drama.

Check below for some more details about the gameplay. 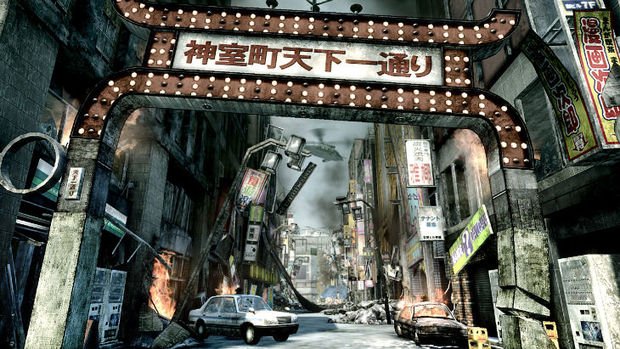 Combat is now concentrated on shooting, with the four using characteristic weapons to mow down the hordes, such as Goda’s cybernetic transforming gatling gun. Yup. Footage was shown of players cooperating with other characters, though I couldn’t tell if it was some form of online multiplayer. If it was, this could be the result of someone asking series director Toshihiro Nagoshi to make his version of Left 4 Dead.

Kamuro-cho isn’t an empty, zombie-filled wasteland, though. That other quirk of the Yakuza franchise, the copious, exhaustively involved minigames, are making a return. Between dramatic cutscenes and gunning down undead, Kazuma and crew can go to batting practice (with grenades), fish for undead tuna, play Pachinko, sing karaoke, and visit hostess bars. Yeah, hostess bars are back, though their staffers are now armed and politely confirm if players are human before letting them in.

A man in a videogame asked “Can love bloom on the battlefield?” The big question for Yakuza Of The End would probably more like “Can gritty urban crime drama full of Mahjong and hostess bars unfold in the middle of a zombie apocalypse?”

The game is apparently going for a resounding “yes”, though it’s unlikely that real Yakuza will be able to call it “surprisingly accurate” anymore.