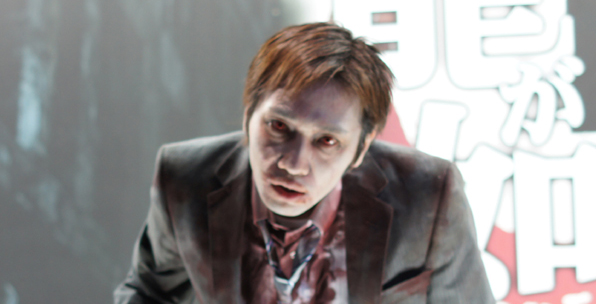 I’m pretty excited to see that the next Yakuza game was going to be about the zombie apocalypse. Underneath their gangster-coated surface, the Yakuza surface are about teasing out who your real friends are; seeing which of your relationships really matter. They are also about ruthlessly manhandling out of anything that stands between you and your goal. At their best, zombies games are about those same two things. That’s just part of why I think zombies and street fighters are a match made in schlock Heaven.

The cosplay seen above didn’t hurt either. I couldn’t help but be charmed by these convincing undead actors and their cruel female executioners. Below you’ll see a quick tease of a few of the mini-games that Josh referred to in yesterday’s post. My battery ran out before I could get the whole trailer. If it’s still playing tomorrow at the show, I’ll grab the whole thing and update for you.