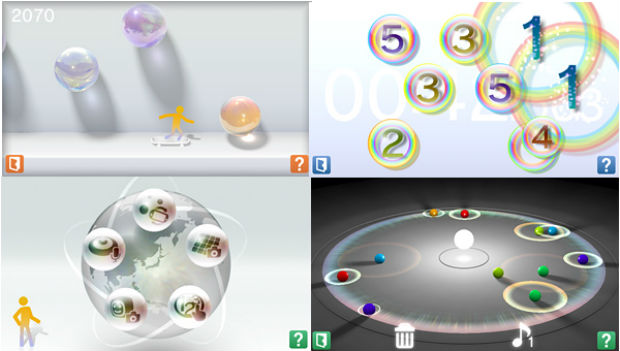 In the middle of the insane lines at the Sony booth at Tokyo Game Show they set up stations along the way to let us play with the Vita’s hardware introduction software, called Welcome Park. This series of mini games teaches first-timers how to use the Vita’s touchscreen, back touch panel, tilt sensors and more. We’ll run down the challenges so you know what to expect your first time.

Welcome Park is a slick hardware tutorial. Our guided walkthrough had us going through four different lessons, and each showed off a different bit of system hardware.

The first demo had numbers popping up on the Vita touchscreen. We were to touch the numbers in order to clear them and start another challenge. Single numbers were followed by layered ones that required double taps. From there, two-fingered taps in different locations were required to clear some numbers. It’s not as boring as it sounds. This lesson, like many of the others, becomes a timed minigame.

Another bit I saw featured a spinning turntable of numbered, peel-able tabs. This section teaches users how to use the touchscreen and gets them used to the touch-and-pull peeling interface control.

The back touch tutorial seems to show that the PS Vita is velocity sensitive, or is at least somehow emulating velocity sensitivity. Users are asked to tap the back of the Vita to push up a ball out of a hole and into numbered hoops above it. The harder I tapped, the farther up the numbered hoops the ball went. It became a game, with tapping in different areas of the back touch pad required. I had super-fine control of how high the ball went with each tap.

The last test I was able to try used the Vita’s tilt sensor. Tilting the system had an on-screen guy on a skateboard rolling around. Flicking the system upward had the skateboard guy jumping up; the harder the flick, the higher the jump.

There’s more beyond what I saw of Welcome Park. A puzzle example uses the Vita cameras and touchscreen to take a picture and then make it a slide puzzle. Another uses the system’s microphone to record and play back sounds in a sort of game.