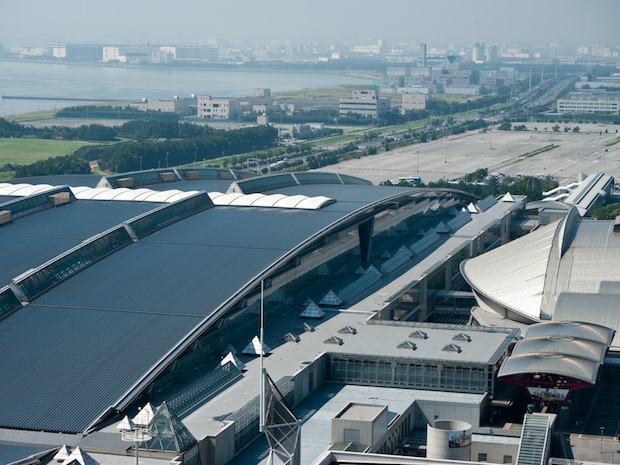 I found myself high up in a tower overlooking the area where Tokyo Game Show is held this morning, so I took the opportunity to film a video and take some pictures to show you. You can see for yourself how huge this place is. You’ll also get a good idea of why our feet hurt every evening after the show.

Tokyo Game Show isn’t actually in Tokyo. It’s in Chiba, in the Maihama area, which is about a 40 minute train ride from Tokyo proper. It’s held in a huge convention center called Makuhari Messe, and it also hosts the Tokyo Motor Show earlier in the year.

As you’ll see in the video, it’s a long son of a bitch that takes a really long time to walk the length of. The smaller dome is the main entry way, and the large buildings are the main halls. Inside there are eight main exhibition halls and TGS uses all of them. Inside there are several shops and restaurants to feed and serve event attendees, but there are tons more restaurants and shops in the surrounding area. Most of the round eyes head to the McDonald’s across the street.

You’ll also see in the pictures and video how close TGS actually is to water. From high up in the New Otani hotel the view is quite nice.