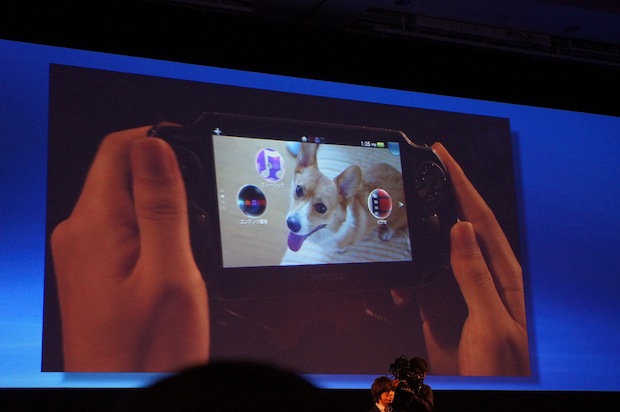 At today’s Sony TGS press conference some of the capabilities and features of the PS Vita were shown off in greater detail than ever before. Corgis were featured throughout in the demonstration, making me giggle the whole time. Even if you do not love these adorable little creatures as much as I do, you still might be interested to learn a bit more about how Sony’s new portable works

The bootup sequence was shown off, as was the initial setup. After the system boots, users will need to swipe down from the top right to the bottom left of the touchscreen to begin. The system asks for the player’s language and time zone, and then begins looking for a 3G connection. After detected, they’re asked if they already have a PlayStation account. The whole process was very quick.

Later we saw that backgrounds could be customized, as can start screens. Both featured corgis in this demonstration. I was so happy.

The video player was shown off with a trailer for Amazing Spider-Man. Touching the screen brings up a panel that lets users control playback. We also saw a music video from Japanese artist JUJU. The high quality of the screen was easily apparent in both examples.

Next we saw a demonstration of the music player. You simply touch an album to play. Touch pause, forward and rewind at your leisure. You can access the system’s Photo Viewer while listening to the music, if you’d like. Multiasking is finally possible on a Sony portable, folks!

Ending any application is simple: just “peel” the app from its top-right corner downward.

Back on the home screen we saw Welcome Park. This software teaches first timers how to use the Vita with five minigames. By using the rear touchpad you can spin a planet to navigate the available minigames. One is a number punching minigame that teaches users how to use a touch panel. Yeah. The Photo Puzzle app shows how the camera is used. It snaps a photo using the camera and then mixes it up as a slide puzzle, which must be solved using the touchscreen.

The Vita’s Web browser looks fantastic. We were told that it is “smooth and comfortable” with the 5″ touchscreen. Multitasking is allowed, even while gaming. I’ll use that to hit up FAQs.

On the social side, the Friend function uses an existing PSN account. With this you can talk to PS3 friends, find friends, exchange messages in games and much more. Trophies can be viewed and shared, as well as compared. Social apps are also ready. Facebook, Twitter, foursquare and Skype are all supported through dedicated client software, and all will support multitasking. For example, you could tweet about a game and then go right back into playing it.

We’ll get a better look at all of these features later this week on the TGS show floor. Stay tuned.