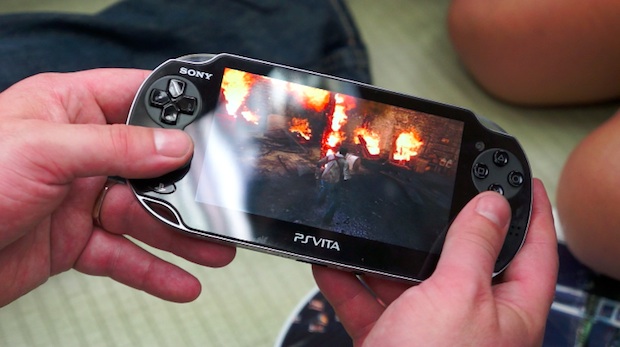 A new level was shown for upcoming Vita title Uncharted: Golden Abyss at a Sony event in Tokyo last night, and I had a chance to check it out. This game is so hot that it’s on fire. No, really. In this demo Nathan Drake is in a predicament. He wakes up from being knocked out and/or drugged in a prison, and the building this prison is in is on fire. Of course.

It opens with realtime cinemas that look very nice on the Vita. When the gameplay starts, the lighting looks just as great, as does fire effects. Drake climbs his way out of a dimly lit room full of scrap wood and rusty poles. I saw that both standard and touchscreen controls worked equally well for navigation.  A brand new balance mechanic was shown off in this demo. It takes advantage of the Vita’s motion control, letting you rock the Vita back and forth to balance Nathan across a single beam high above the floor.

Once Nathan clears this obstacle he meets Marisa Chase, a new character to the series. She directs Nathan across even more obstacles in this building, but before he goes he picks up a machete. He’ll carry this with him through the entire game, and it opens up a new mechanic in the game that lets you look for hidden pathways. By simply tapping the machete icon on the on-screen HUD, the game switches into a gesture mode to let Nathan swipe at obstacles.

Nathan continues to try to find his way out of this burning building, climbing up poles and shimmying across ledges. It was here that I saw an example of being able to tilt the Vita toward one direction and then swiping it to make Nathan jump across to another platform.

As the demo continues, Nathan later meets up again with Chase, and then the level transitions into fighting. Nathan was able to take out a guard and steal his gun, allowing for gun play. You know, standard Uncharted stuff. Sexy stuff. Just a bit smaller this time around.

Uncharted: Golden Abyss is going to be one of those Vita games that proves that console-quality games are possible on this portable. It looks really good. It’s going to sell systems, I’m sure.