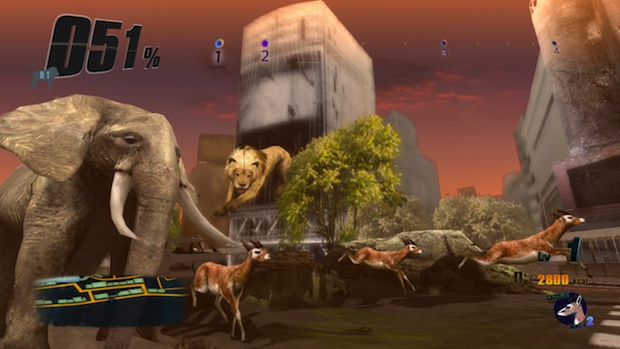 One of the titles I was most excited to play was the recently announced PS3 game Tokyo Jungle. The concept seemed so funny to me when I first heard about it — it’s animals on the loose in Tokyo, fighting for survival. Finally getting to play the game was even more funny than I imagined. Imagine my surprise when I found that I would be killing rabbits as a Pomeranian with a little red t-shirt on.

In the Tokyo Game Show demo, you start out as the little pup in a cutscene where he’s chasing rabbits, but isn’t fast enough to do so. Three rabbits scamper away, and the last turns around and mocks the poor dog. That’s when the player takes over, helping to guide the Pom to its prey. Yes, you are actually out to kill and eat lesser beings to survive.

Through a tutorial of sorts, you learn how to control the dog, helping it to successfully catch the prey that is wandering around a ruined Tokyo. After the game shows you the basic movement controls it immediately has you prowling, looking for prey. When you first encounter a rabbit, you’ll hold down the R1 button to creep up on your victim, hiding in the bushes. When you’re ready, holding L1 and pressing triangle causes the little dog to pounce on the unsuspecting rabbit, instantly murdering him in a flashy slow-motion tackle. Watching a little dog take on a larger rabbit in-game is just as funny as it is in your head.

After you kill the poor thing, you’re expected to eat it and revitalize your little pup, so that he can move on and hunt bigger and better things. There’s even a meter that tracks calorie intake, and the end result of eating your prey is improved stats for your offense, defense and stamina. Seriously.

The demo eventually takes you further into the city where you’re actually taking on cats. After munching on a few normal sized house cats, I came across the final boss, an over-sized cat. It took quite a bit of pawing and gnawing to take him down, but when I finally did, my cute little Pom Pom ran over to the cat’s makeshift house (some boxes and old blankets) and rolled around on his back in a strange victory dance.

Sony, if you don’t release this game in the west, I’ll never talk to you again.

Filed under... #Tokyo Game Show#What the hell was that?