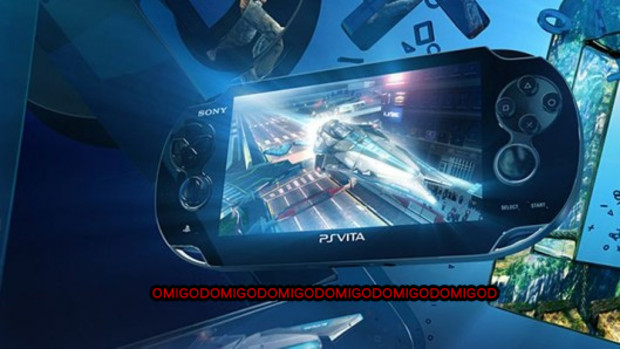 [For last week’s Bloggers Wanted, I asked you to tell me your reactions to the announcements made at Tokyo Game Show. Time Glitch is first up for promotion, and he has quite a bit to say about the Vita. If you’re interested in seeing your own work on the front page next week, write something about our current topic: Obscurity. — JRo]

It’s no secret: anybody that knows me knows that I don’t enjoy many Japanese games. Outside of core Nintendo titles, I don’t really connect with anime-styled Japanese games like Persona or Dragon Quest. Outside of Pokemon, I can’t even stand looking at, let alone playing, most JRPGs. This means that whenever this time of year rolls around, I just tune out the Tokyo Game Show. It tends to be full of the type of games I just loathe…it’s my anti-E3.

But this year, I was interested. I was excited. I found myself reading through TGS updates rather than simply glossing them over for other gaming news, because this year, TGS had information for the one device I’ve been holding on a pedestal ever since it was announced. It’s something I’ve talked about a lot on this blog, and is a purchase I never thought I’d make.

The Vita. My one and only.

At E3 this year, I was absolutely sold on the little wonder device. Almost everything I saw about it made me want it even more. Cross-platform play, 3G online services, full HD graphics, and core game titles that weren’t JRPGs? SOLD. A thousand times SOLD. While a lot of my initial sales questions were answered (Like “Can shooters be played on this bite-sized slab of win?”), the little details seemed to be pushed to the wayside in favor of showing us the big features and power of the system itself. That’s where TGS came in, because while they didn’t “Wow!” me like they did at E3, Sony came out with an very well-rounded info-package to fill in the grain, and gave me all I needed to make a final decision. 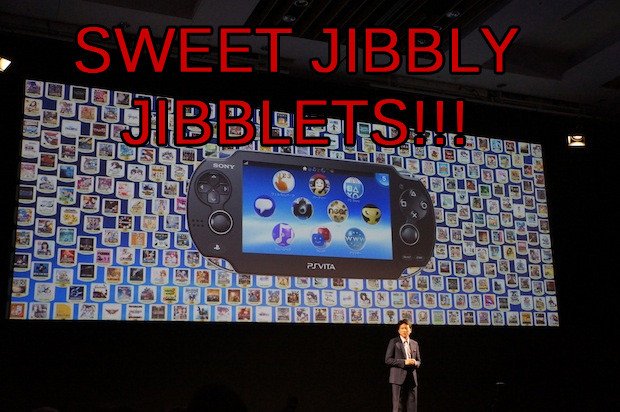 The biggest announcement for me was the PSP integration. I was one of those people that skipped over a PSP not because I didn’t like the games that were being offered, but because the system was just not up to my standards. It was fantastic to hear that Sony is dedicated to providing the Vita with tons of PSP support, especially from the PSN. They even announced that they’re looking into some kind of UMD support program, which is great because I’m still a fan of buying my games in physical form. I’m going to really enjoy catching up on some cheap PSP games on my Vita with dual-analog control support. 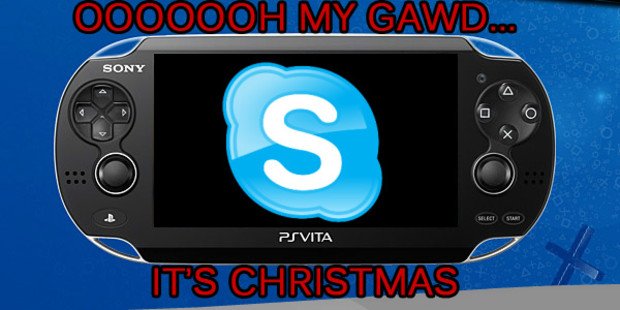 Expectations were exceeded, however, when I read about the Vita’s in-house features. While I knew that it would probably ship with stuff like a Web browser and Netflix, I was mildy surprised to learn that it would also come with dedicated apps for Twitter and Facebook. I wasn’t exactly impressed though, until I heard that it would come with Skype (Recently purchased by Microsoft, no less!). I use Skype on a daily basis, and this is going to be huge for when I’m not at home or able to use a laptop. On top of this, I found out that there will be multitasking support available, so I’m holding out hope that I can have a Skype call and play some Vita games at the same time!

Overall, the infrastructure of the Vita looks to be superb. Building on the already-strong platform of the PSN was a very smart move, and it looks like the Vita will be more than just a handheld, but an extension of the PS3/PSN platform. I think this is what the PSP wanted to be from the beginning, but just couldn’t deliver at the time.

However, one cannot ignore the single, glaring issue to come out of the Vita at TGS. 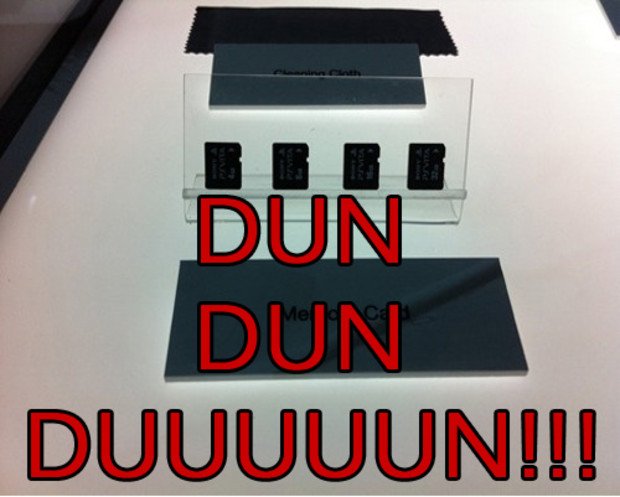 I’ve held the Vita in very high regard so far. It looked like something that had very few flaws, but those flaws were outshined by its many superb features and design decisions. Unfortunately, this is the point where my praise of the Vita takes a pause and my critical nature feels the need to take over. I’ll preface all this by saying that this has not changed my mind about purchasing a Vita. I still want one, and I’ll still get one. 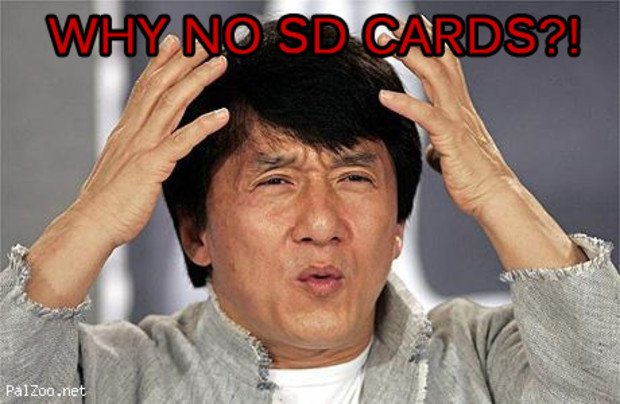 Frankly, the decision to use anything except your standard run-of-the-mill SD cards on the Vita was a horrible PR move, on top of being an absolutely boneheaded business decision. As if they said “We can’t stop here!” on the train-route of horrible ideas, they also chose to charge as much as $150 for their largest proprietary memory unit, which clocks in at only 32GB. For a platform that’s trying to pride itself on digital distribution, it’s very expensive, and it’s not a lot of space. In a time when Sony needed to win bonus points with its fans and gamers at large, making the mistakes that they’ve always made is not a way to do it. 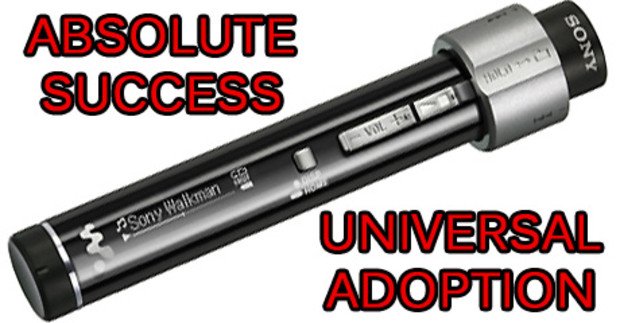 As many have pointed out, Sony has a history of pulling this kind of nonsense. They did it way back in the PS1 days with charging as much as $50 for their proprietary memory cards. Sony has a habit of overcharging for some new media format that isn’t industry standard, and is only used on one of their products. The UMD drive was the big deal with the PSP, the ATRAC player before it, and I guess the Vita’s memory sticks will be the latest enthralling episode of “Sony Acts Like Blockheads”.

Oh, and did I mention that they probably won’t be bundled with one?

This little hitch in an otherwise smooth and positive build-up for the Vita is definitely going to cost them some customers. Where at one point we were looking at a reasonable $250 for the cheapest model, we’re now looking at something like $400 for a Vita that has reasonable storage space. I know that while I’m going to get a Vita eventually, I don’t know if I’ll be getting one day-1 now. I’ll probably wait for a 3rd party to provide a cheap alternative memory stick, or for Sony to re-design the Vita to work with SD cards.

I’m not entirely confident about that second one…I wouldn’t bet against Sony letting the Vita rot on shelves when the only thing they need to do is admit they were wrong *shudders*.

One also has to wonder what they were thinking from a competitive standpoint. The 3DS is compatible with any standard SD card. If you’re looking at it from the point of your average handheld consumer, they now have the choice between a 3DS and 32GB SD card at about $210, or a PS Vita and 32GB memory stick at about $400. That’s almost double the price, whereas before the Vita was looking quite competitive in comparison to the 3DS. I guess there’s a catch to everything, and there had to be something that I didn’t like about the Vita. I find it utterly ridiculous that in this day and age, Sony still feels the need to “set a new standard” when a perfectly good standard already exists. 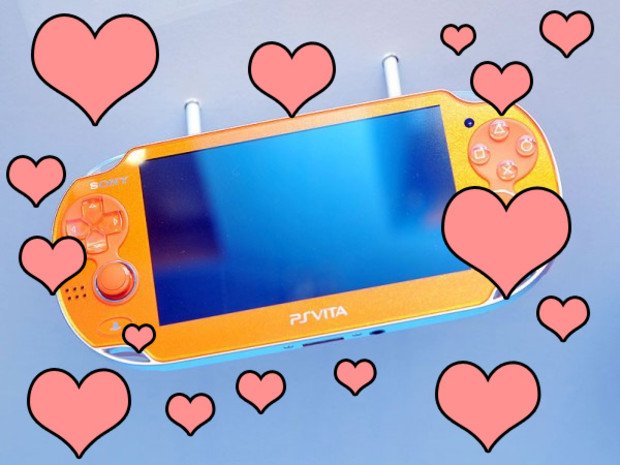 Still, I can’t help but love the Vita and I’m still really excited to see what else is coming for it outside of the already announced titles. I’ll be looking its way for my very first mobile FPS experience, and maybe even Gran Turismo on the go (something I have literally been waiting for since I was 7 years old). It’s still the only handheld I’ve been truly excited for since I was a kid, and I’m not going to let this debacle ruin my good will for what I believe is an excellent piece of hardware.