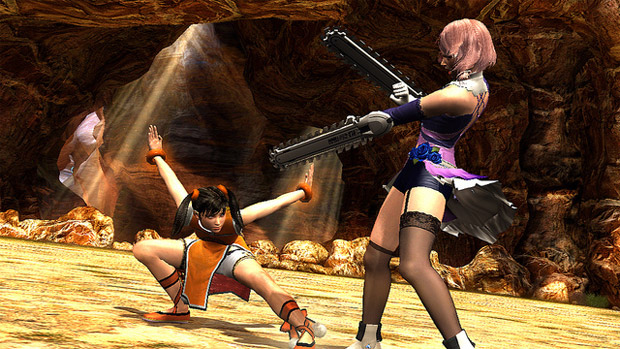 Namco had the Prologue demo playable and it was, well, it was Tekken. It’s the Tekken you know and love, but with some tweaks here and there. Specifically, you can perform team tag attacks called Tag Assault. It’s basically you and your tag team partner ganging up on your opponent for maximum damage. Every character can do team attacks, but specific teams will perform special moves (like say the two Kings ganging up will be better than a King and Law duo, for instance.)

Visually, Tekken Prologue was looking pretty good. It wasn’t quite at 60 frames per second, but it was pretty fluid, even in 3D. While the combat is the core Tekken experience, the environments aren’t quite what Tekken players will be used to. Players can be knocked through walls and kicked around as fights can take place in multi-level environments.

Sadly, there won’t be any online multiplayer with Hybrid. But there is a 3D Model Viewer mode where you can pan a camera around one of the four characters in the Prologue demo as they perform moves and stuff. It’s no online, but hey, upskirt views! Yay?!