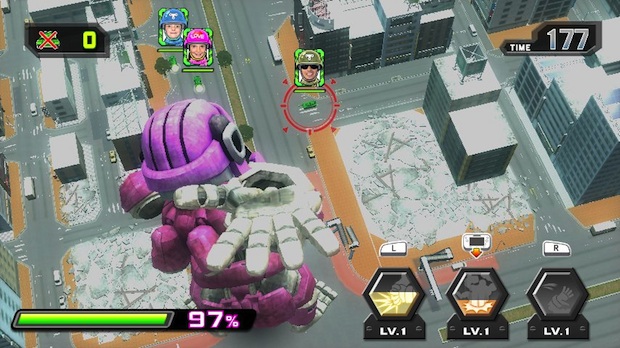 I had a go at the new four-player mode for upcoming Wii U game Tank! Tank! Tank! here at TGS 2012. Namco Bandai calls it My Kong Mode, and they say it’s a perfect fit for their casual party battle title. The game also includes a free-for-all mode, a team vs. mode, and a “fight against giant monsters” mode, but we’ll be focusing on Kong mode here.

The Kong mode has up to three players using standard Wii Remotes (in the sideways-held controller mode) to drive tanks, trying to take down a giant “Kong” robot, controlled by a fourth player using the Wii U game pad. The Kong player will use the Wii U pad’s screen to attack the tanks while the others view a split screen configuration on the television. The attackers are free to drive around the stage picking up power-ups to add weapons to their arsenal, using anything they can find to chip away at the Kong’s huge life bar.

Before starting My Kong Mode, every player will use the Wii U game pad’s front-facing camera to create a portrait. They’re free to chose some funny overlays to turn their face into something more cartoon-y. The portrait taken for the Kong player is used as the face of the Kong, which means that you’ll be shooting at the real-world face of your opponent. With the given tools it’s pretty easy to make some funny faces.

As a tank player, game play involves frantically driving around looking for openings to fire on the massive Kong. While stages are large, they’re still fenced in, which means that you can run, but not hide. Finding randomly scattered power-ups lets you hit the the Kong with a bit more firepower than you’d have with the standard weapon. Outside of this, playing as a tank could not be more simple, as you can only drive and shoot.

The Kong player gets an overhead view of the map and others players on the Wii U game pad’s screen. Using the L and R buttons the player can use hand slap or fist smash moves to smack around tanks. Flicking the controller downward lets the Kong do a butt smash on tanks, taking them out completely, and shaking the controller powers the Kong up, making it glow gold with power. The goal is to use these tanks to survive long enough for a countdown timer to complete.

Tank! Tank! Tank!‘s My Kong Mode is pretty simple, but I could definitely see it being a hit with friends as a party game. The game is slated for the Wii U launch window.