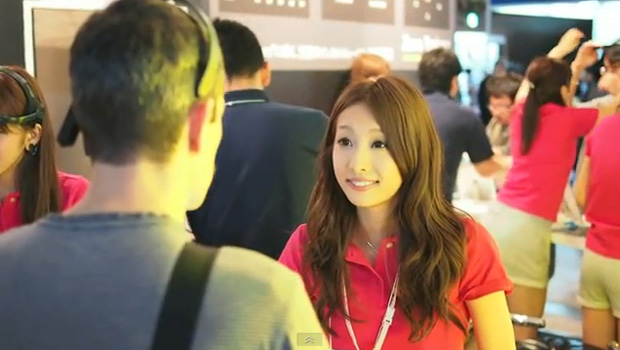 This ranks as being one of the most awkward experiences I’ve had this week at Tokyo Game Show. Brain Kiss is a sort of “Love Meter” application, using a brain scanning apparatus to determine your emotional interest in another person. Simply put the band on your head, clip it to your ear, and then stare uncomfortably into the eyes of your object of affection for the longest fifteen seconds of your life.

I don’t know how well it really works. The device claimed that I was in love with the (admittedly attractive) woman at the booth who demonstrated the system for me. Meanwhile, I had been trying to trick it by intensely visualizing Margaret Thatcher scissoring with with Bea Arthur. So, it’s either capable of seeing through that kind of deception or I’ve learned a whole lot about myself today.

The worst thing? Dale North hadn’t set his camera for manual focus the first time we shot this video, so we had to go back the next day and do it again. And as neither of the girls I used Brain Kiss with made any effort to show me what result they’d received on their own screens, I’m left to conclude that they didn’t want to have to deal with the heartbreak from declaring their animal lust for a married man.