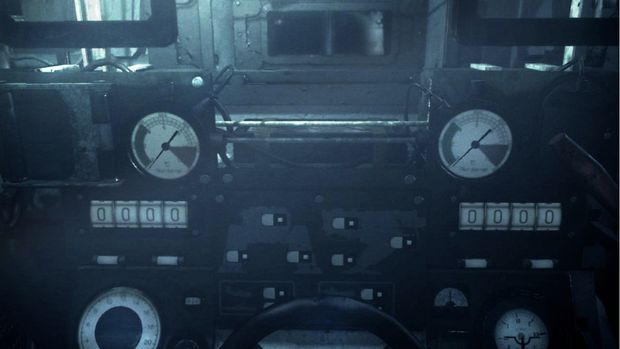 Even though there were only two games that ever used it and it was expensive as hell, I really loved the Steel Battalion controller. I love mechs so much and I always figured that controller was the closest I would ever get to piloting a mech in real life.

By some stroke of luck, Capcom decided that they would revisit the series and the team saw the Kinect as the best means of bringing that simulation mech combat action to gamers. In combination with the Xbox 360 controller, Heavy Armor is on the right path on nailing the over-the-top controls.

Let’s talk the controls first. It’s not going to be easy to learn at first, but neither was the original Xbox one. There will be a tutorial to help players learn all the gestures. Anyway, with the controller, you’ll be using the analog sticks to move around and the triggers to shoot your gun. Easy enough, right? Now here’s where it gets super complicated!

First you’ll be able to interact with your co-pilots (more on that in a bit) by swinging your arm left or right to look around the cockpit. The view at first has you looking at your instruments that you can interact with. To actually use your weapons, you will push your arms forward to look through the little screen in front of you so you can aim at targets. To go back into the cockpit view, you just pull your arms into yourself.

There were at least a dozen other intractable objects in the cockpit, from pulling a leaver above your head to changing a screen to see what’s behind you. All of the actions required specific movements, so you would pull your hand up and down to simulate pulling down the leaver, for example.

All these actions need to be performed while sitting down. There are instances where you will need to stand up though, such as when you need to stick your head out of your mech and look at the distance through binoculars. You are a very easy target while sticking out of the top of the mech!

Additionally, you’ll need to perform actions like shaking someone’s hands for a job well done or even pull someone back into your mech because they’re trying to escape. The cool thing with these specific actions is that they can go one of two ways. If you manage to grab the guy who’s trying to flee your mech in time, you will need to actually punch him in the face (by doing the proper arm gestures of course) until he comes to his senses. If you don’t get to your partner in time, he will get hit by enemy fire, die, and remain in your cockpit as a bloody mangled corpse until the next mission.

So you’re probably thinking, why do you need multiple people to control a giant robot? Well in Heavy Armor, a microb that eats silicon came into existence and sets the world back hundreds of years as there is no more comptures and any sort of technology that needed silicon. With the world in shambles, a big Asian country that may or may not be China has started taking over the world.

In Heavy Armor, you plays as Lieutenant Powers as the American forces try to regain parts of America taken over by not-China. Since people can’t rely on computers to assist in anything anymore, robot tank pilots need additional help in the cockpit. You have three other people crammed into the tight cockpit and each person has a specific job as gunner, navigator or engineer.

One of the focuses Capcom has put into Heavy Armor is the emotional relationship with the crew. There’s not much room in the cockpit and the sound of war is pretty nerve wracking on the co-pilots. The crew is pretty talkative and they actually do serve a purpose too. Earlier in the demo, the gentleman running the demo almost walked into a minefield. The navigator stopped the player just in time and the crew went down another path.

Visually, Steel Battalion was shaping up alright. The preview was in very pre-alpha status but it ran without any glaring issues. I was pretty impressed with the backdrop. I totally forgot the level was taking place in New York until I saw the cityscape and the Statue of Liberty in the background. It was kind of jarring, actually.

I really want to get hands-on but my early impression of Heavy Armor is that Capcom is on the right path in terms of getting that Steel Battalion vibe. Capcom is looking into online but there they weren’t able to go into specific details.

Oh, good news and bad news! Good news: The self destruct button is in your cockpit and it WON’T kill your save data. Bad news: There is no windshield wiper button.