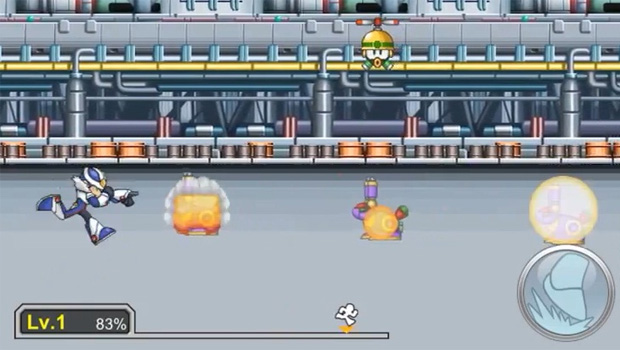 The Mega Man fan community seems to have their knickers all in a twist over Rockman Xover, Capcom’s latest iOS adventure for OVER-1. At least, that’s the impression I get from Tony Ponce, and I don’t know a greater superfan, so I’m just going to assume he’s speaking for pretty much everyone.

Today at Tokyo Game Show, I decided to see what all of the fuss was about and, honestly, I don’t get Tony’s rage. I don’t get most rage, though. Seems like a lot of unnecessary effort over something that you could simply choose to not support. And Rockman Xover should be a pretty easy thing to forget about, not least of all because it’s unlikely you’ll ever be forced to play it.

The gameplay demo of Rockman Xover here on the show floor is a single stage, challenging Storm Eagle. The stage consists of two sections, just like the standard Mega Man formula of a stage with light enemies followed by a boss encounter. But where one would normally find a lengthy series of platforms, ladders and deadly spikes, Xover has a simple, forced scrolling stage.

Moving from the left side of the screen, the new Reploid OVER-1 runs along on his own. He can be made to jump and shoot his buster by tapping on buttons in the corner of the screen as enemies approach from the right. The buster charges automatically and can destroy as many as three enemies at a time when fully charged. A Giga Crush ability is present as well, acting like a smart bomb which eliminates all onscreen enemies at once, and slowly charges as enemies are killed.

Upon reaching the end of the forced-scrolling section, the boss encounter begins and the game moves to a very simple turn-based combat system. The only actions available to me in my fight with Storm Eagle were to fire the buster or to fire a charged shot. Every hit (to either side) increased the charge meter, which could contain up to three shots which did about triple the damage.

Is it thrilling? Well, no. The demo was such that I couldn’t possibly screw it up. Enemies dealt no damage during the running section and it was mathematically impossible for Storm Eagle to deal enough damage to OVER-1 to destroy him. The combat is, at least insofar as the demo would show, very shallow. There was no blocking, no dodging, nothing really to do at all.

So, why am I not enraged with the fire of a thousand suns? There are two reasons. First, it’s a mobile game. I’m not saying we should make excuses for phone games being crappy, but this is a representation of traditional Mega Man gameplay and I think using autorun and turn-based mechanics to represent that on a platform otherwise not conducive to the demands of the traditional design is a novel way to do so.

The other bit is that I haven’t seen enough to make a real value judgment. My demo included no additional characters besides OVER-1 and Storm Eagle (and Mets and Batton Bones in the autorun segment). The collection and use of cards seen in the trailer was nowhere to be found, nor any of the “rock, paper, scissors” style of enemy resistances which are a core staple of the franchise. So, there’s a lot I still don’t know and it would be foolish of me to dismiss it out of hand simply because of the property it’s associated with, let alone become enraged because they’re not treating the property I love the way I think they should.

I guess I’d just rather they kept trying new things because the old ones haven’t been working too well for me lately. Xover is a new thing and one which has some potential to be a neat little game, though until I see more of its elements it’s impossible to know exactly how much. I guess I just don’t see what there is to be angry about.