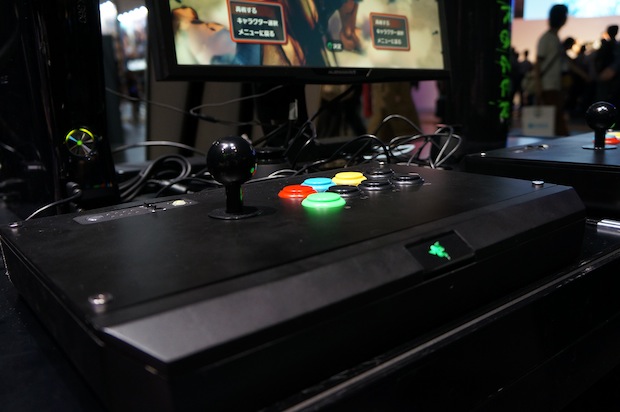 Razer is getting into the arcade stick game, and they have prototypes here at Tokyo Game Show to show off. I had a chance to poke at one and even pop it open today. It looks like a serious piece of kit already, but it’s not even close to being done yet.

Product Marketing manager Hilmar Hahn told us that they have created this prototype arcade stick with feedback from the gaming community, but they want gamers to get their hands on it and give more feedback so that they can create the perfect stick. They’re currently accepting beta sign-ups to accept even more feedback for the second round of tweaks.

They’ve already done a fine job. The prototype I saw was solid and beefy, and had Sanwa parts in it. They’re easily changed to any other parts with the stick’s handy open button, located right along the front edge. By pushing in this button, the top opens, and all parts are easily accessible and changeable. Inside there’s also storage holes for two more buttons and a joystick head.

Inside you’ll also find a multitool that will allow users to remove the top panel screws and easily replace the panel with another one, allowing for custom artwork.

The unit is still early, but it’s already off to a great start. We’ll have to wait a bit longer for pricing details and ship dates. Stay tuned. Be sure to check out some pictures we took of the stick in our gallery below.