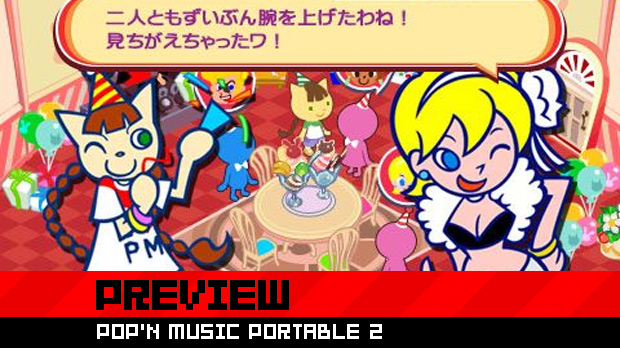 One of my favorite things about my local arcade is its Pop‘n Music cabinet. Slamming the machine’s big, illuminated buttons to remixes of classic Konami themes is one of my favorite things to do on the weekend. Most gamers, however, aren’t lucky enough to have a Pop’n Music arcade cabinet near them, not to mention an authentic Japanese arcade.

A PSP controller is a poor substitute for the cabinet’s eight buttons, but fans and newbies might be happy to know that it’s at least an option. After getting some hands-on time with the series’ latest portable release, I’m pleasantly surprised to discover that the game holds up as well as it does with the PSP’s buttons and d-pad. It’s unfortunate then that some of the other features don’t fare as well.

At TGS, I got to check out Portable 2‘s misnamed Party Mode which is a new edition to the portable series. You move your avatar along a board in search of treasure boxes filled with items, characters to converse with and songs to play. You even need to level-up your character in order to reach new areas. Although having character progression and a story wrapped around the traditional Pop’n Music game is welcome, the execution leaves me feeling underwhelmed.

So much of the board is filled with empty spaces (for no apparent reason), prolonging the time it takes to get to the next song. The amount of boring dialog, navigation and item hunting is disproportionate to the songs themselves. Perhaps the board will be more populated with more interesting events in time, but in its current state it turns the game into a total bore.

Add on that the fact that playing without the traditional controller takes much of the fun away and you have a port that may not cut it for series fans. The curious and most dedicated may want to keep up with the game’s progress, as it nears closer to its release date. With a little fine-tuning, the game’s story mode could be good addition but I’m still skeptical about this one.

Back to the arcade, I suppose.