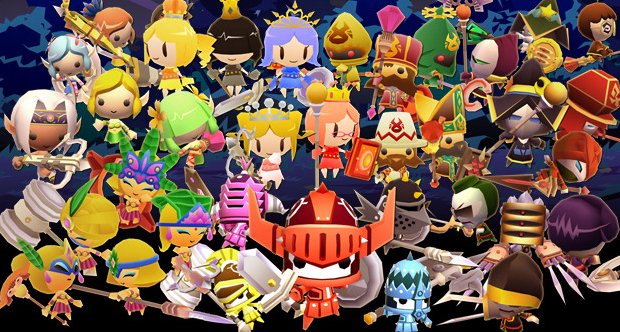 Castle Crashers became an international hit in a way no one expected an American indie game could achieve, so it’s only natural for a Japanese game seemingly influenced by it to appear on the marketplace. Picotto Knights is that game, but it’s also a lot more and a lot less.

Picotto Knights‘ levels are shallow ventures that last only a couple of minutes as you take on a couple enemies or a single boss. The customization and loot however is where the meat of this free-to-play Vita game lies. The game has a Ragnarok Odyssey quality in it being based around social interaction and cooperative play. It’s not a coincidence that both of these games are developed by Game Arts.

You are always leveling your character up, giving him or her new equipment, and accessories (you can get a Toro cat if you download the game in Japan now). Each missions ends with opening a series of chests you gathered. It’s hard to tell how much the free-to-play aspects will come into action, but the combat of Picotto Knights is a bit too shallow for me to care in the first place.

For PS Vita owners who love some loot, Picotto Knights may be of interest. There aren’t any plans for a Western release, but the game is currently available in Japan.