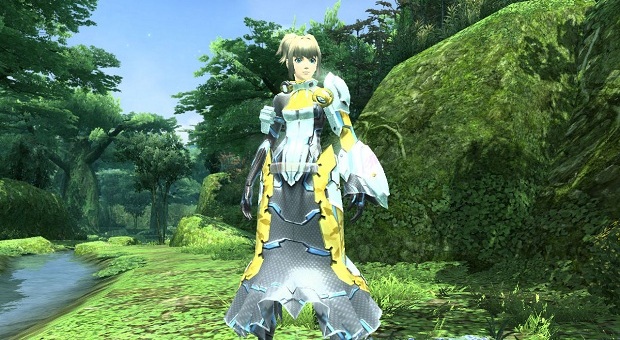 No game proved online multiplayer games can work on console more than Phantasy Star Online did, when it was released for the Sega Dreamcast a decade ago. Even with a keyboard awkwardly stationed on my lap and a unreliable 56k connection, I was hooked. Combining the hack n’ slash action of Diablo, colorful futuristic world of the Phantasy Star series and multiplayer aspects of Everquest blew my mind as a 14-year-old.

After many ports, sequels and a card game, I stopped following the series and chose to remember only the Dreamcast days. The boldness of Sonic Team naming the next entry in the series as a direct sequel to the original (Phantasy Star Online 2) caught my attention at TGS this year. I needed to check it out and see what I’ve been missing and what dedicated fans have to look forward to.

For the demo, I played the role of some sort of robot class that could jet pack around and glide across terrain. The sense of speed and weight didn’t really capture the character’s build, which took away some of the enjoyment of the character design. This is a work of progress but it’s these sort of details that cheapened the series to feel like a Korean free-to-play multiplayer RPG in my eyes.

Since the game is PC only at the moment, you can play with a keyboard/mouse or a controller. I chose controller, which was a bit of a challenge due to all the commands in the game. Once I got it all figured out, I was able to get by alright. You have a light and strong attacks, a block button and a glide/run ability to help make long treks shorter (but not short enough). Oh yeah, and you can jump (finally!)

The brief 15 minute demo spawned me and 11 other party members in a spaceship lobby. We then teleported into a grasslands area that seemed almost like a direct remake of the original’s opening area. The game divides parties into teams of four, so things never got too chaotic. The same seemed true of the giant fire dragon boss we fought at the end – I’m not sure where the other eight players went (perhaps fighting their own boss?)

Along with some sword attacks, you can equip guns and shoot to your heart’s content with unlimited ammo. The game’s lock-on targeting system is fairly confusing, but you can also go into aiming mode which feels a bit like a broken Resident Evil 4 (maybe Mindjack would be a better comparison). Nevertheless, switching between gunplay and swords changed the feel of combat and opens the door to some cool Devil May Cry moments.

The game is very, very pretty when running on a powerful PC. It’s too bad then that the grasslands area looks as bare as the original, when it should be filled with trees and shrubbery. Everything about this game just feels kind of off, from the movement to the enemy collision. This is only the Alpha build (which some lucky Japanese fans will soon get their hands on), but the demo felt a bit underwhelming to me. The graphics and ideas are there, but it’s missing the polish that made the original so addictive and fun.