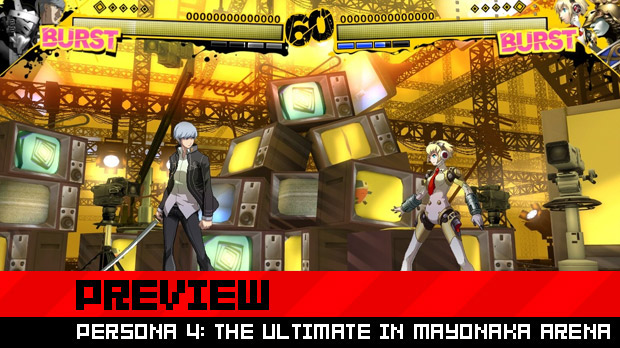 As a videogame geek, there are some mash-ups between developers and franchises you dream about happening. Sometimes they happen (Marvel vs. Capcom), sometimes you wish they didn’t happen (Ehrgeiz) and sometimes they never happen (Secret of Mana vs. Final Fantasy: Beach Battle Blitz).

Although Arc System Works making a Persona fighting game long lived on as only a wish, it has now become a reality. And, thank God for that because it’s shaping up to be an incredible fighting game that has the potential to reach beyond the Persona 4 fanbase while speaking to it directly.

For the first time, Persona 4: The Ultimate in Mayonaka Arena is playable this weekend at Tokyo Game Show. Although the game has yet to be announced for a console, Arc System Works brought the arcade build to TGS. It stood out on the show floor, not only for pulling in a large crowd but also due to it being the only arcade cabinet at TGS this year.

Since the game brought in such a long line, press were limited to only one match. For mine, I played with Kanji who controls like a slightly faster version of BlazBlue‘s Iron Tager. The real reason I chose him is because he bashes his opponents with a traffic stop sign. His sluggish speed is made up with some powerful, defensive moves he delivers via his persona. Every character in the game has their own persona that they are paired with. The personas deliver characters’ most powerful attacks.

Along with three regular attack buttons, the controller has its own dedicated persona button. Projectiles, powerful blows and special attacks all come from the player’s persona. As with the game’s RPG counterpart, the player is limited in their persona use by a meter along with SP use. Using a special persona attack triggers a flashy animation, complimented by a comic panel displaying the character’s face. To say, “It looks kind of neat” doesn’t do it justice.

The stages themselves are amazing in both their fan service and detail. The demo contained a Midnight Channel stage, school entrance stage, and a Velvet Room stage. My favorite has to be the train stop stage, which perfectly captures the atmosphere of Persona 4 with ghost’s shadows flickering in and out of the stage’s detailed night sky and suburban sprawl.

The Ultimate is an Arc System Works game through and through, down to the goofy match start screen: GRAND PRIX! (uh, sure?) This also means that the game may very well be another interesting experiment for the company that is best played for fun amongst friends rather than competitively for local arcade fame.

Being that this is Persona 4 we are talking about, the fan service alone makes the game worthwhile. Seeing the characters I’ve grown to love come to life with such detail is gratifying on its own, but the addition of the game’s accessible fighting system makes me even more excited for this.

If you are in Texas, I highly recommend coming down to Houston for Anime Matsuri and checking it out for yourself.