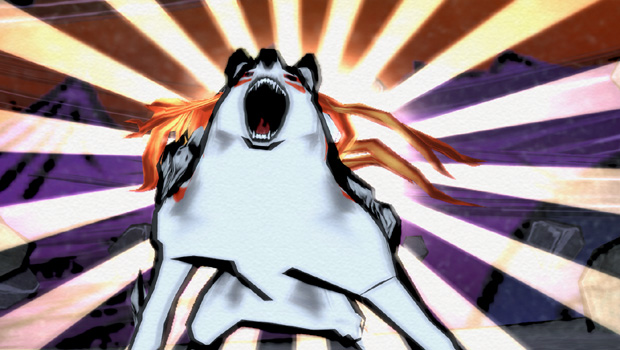 I don’t know how many times I can play Okami and come up with something to say without feeling like I’m repeating myself. I played it on the PS2, then again on the Wii, and today I played it on the PS3 in its latest incarnation, Okami HD. I suppose it’s a testament to how much someone at Capcom believes in Okami that they’re trying yet again to get the game to sell in the numbers that it likely deserves.

This latest version is just as fine as any other, for what it’s worth. The PlayStation Move controller works a treat for using Amaterasu’s painting powers, as you’d expect if you have any experience with the Wii version. Honestly, it’s probably better, but I’m not prepared to make that call on the basis of a press room experience (though, in fairness, the demo took place in a busy conference room; hardly the tightly controlled environment which would arouse suspicions). The jump to high-definition visuals is noticeable and everything looks crisp.

Everything except Amaterasu, that is. Maybe it’s just the godly energy showing through, but the white wolf has a noticeable blur in motion that directly contrasts with the crisp, clean environments and other characters. I found it mildly distracting, but that could also just be down to my seeking of anything new or different about this release. Even the three visual filters found in the game’s options menu failed to give me anything to work with, as I couldn’t observe any discernible difference between “Normal,” “Light” and “Heavy” filters.

Okami HD is, in all likelihood, going to be the definitive release of a game hardly anybody bought. I’d like to believe that somehow, this time will be different. I’d also like to believe that if I eat Taco Bell every day, I’ll never get fat, but reality has a way of disappointing no matter how hard you wish for something.