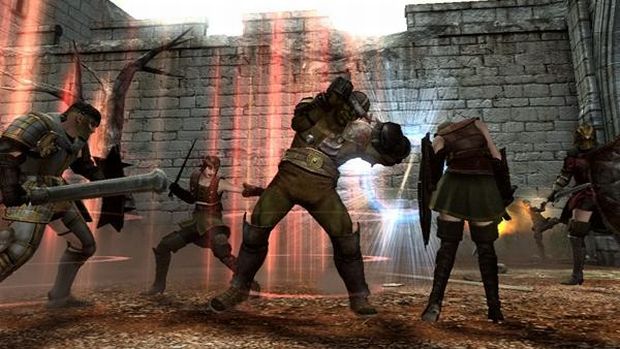 NIS has teamed up with Acquire to do something completely different. Clan of Champions (or Gladiator VS as it’s known in Japan) is a medieval-themed third-person action-adventure game in the same vein as Demon’s Souls. The game can be played solo, but it seems that you’re encouraged to play with up to two other people. I only played single-player, but Spencer over at SiliconEra informed me that it’s best to play with others to get the full experience.

What I did play at least seemed very promising. The first thing you can do in Clan is create your own character. You have a choice between being a human, elf or orc. From there, you can customize your characters fighting style, face, body type to much more. Then you can select your weapons, everything from sword, axs, shield, double handed swords and more. Plus there’s over 24 magic skills you can give your warrior.

Combat for the most part was pretty challenging. Something I found cool was that your and your enemy’s shields and armor can be broken during fights when they’ve taken too much damage. Losing the armor does mean you’ll take more damage from enemies, obviously. I also found it neat that you can take any weapon you come across, like ones from fallen enemies. You may just want to focus on a few weapons though as the longer you use a weapon, the more skills and moves you’ll learn for it.

You and your two partners can also go online and take on three other players in some versus matches. That’s about the gist of Clan of Champions. Expect the game to come out sometime next Spring for the PlayStation 3, Xbox 360 and PC. And like the rest of the newly announced NIS games, expect a steady amount of downloadable content too.