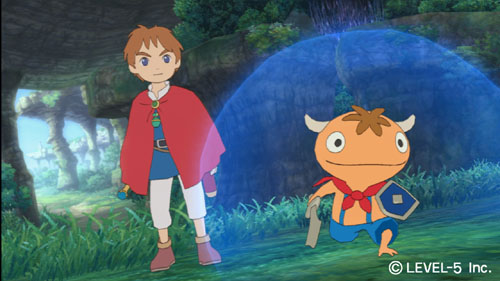 Ni no Kuni does for Ghibli movies what Uncharted 2 and God of War 3 do for American action films. The game is a first class anime that you can play. All of the backgrounds are coated in beautiful, watercolor-style textures, and the games characters are masterfully cel shaded. Where the game really got me was the character animation. It’s so subtle, yet so masterfully crafted. The most evocative moments from Studio Ghibli films often come from those quiet, seeming inconsequential events that somehow work to make the animated world on screen feel completely real.

In just the brief time I had with Ni no Kuni, I experience several moments like this. The way that the game’s young protagonist seriously but playfully hops from rock to rock when traversing a small stream, the way his small cape seems alive as if waves in the wind, the way an NPC glances over at you as you walk by with a slow calm that speaks to an existence of totally harmony; it all comes together to put the player in a state of tranquil, but intense engagement with the game’s events.

Oh, and the gameplay. It’s pretty standard stuff. The battle system felt reminiscent of Final Fantasy XII; real-time combat with multiple commands that you can send to your party. My Japanese is awfully weak, so who knows what I was doing, but I counted about ten directions in all that you can give to your party members, and about five commands that you chose for yourself. It mostly felt like the NPCs where taking out the game’s enemies on their own, but that was fine by me. I was happy just to be there.