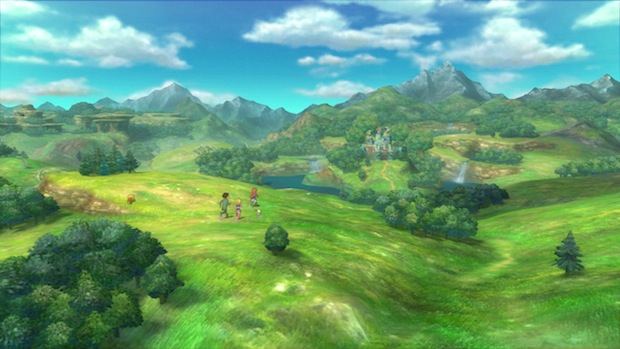 Are they serious with how great this game looks?

Level-5’s Ni no Kuni is a head turner. Its beautiful, hand-drawn look and vibrant colors stood out among the sea of Sony’s offerings at their TGS booth today. Its looks drew me in and kept me there. I actually came back for a second playthrough later in the day. I don’t think there’s a prettier game on the show floor.

Of course, Studio Ghibli played a big part in making this game look so great. This game looks just as animated as any of Ghibli’s films, and this applies to every bit of the game, from the overworld and battles to town exploration. I caught myself enjoying a visit to a town’s shop. Imagine a game so good that you would want to stick around in an RPG’s item shop!

Forget icons on overhead maps. You’ll hate everything else when you see how gorgeous Ni no Kuni‘s overworld exploration is, with its lush greenery and crayon-like shading. The battles are just as pretty, and even minor enemies look as if the creators spent extra time on them to get them to stand out. The real treat comes with the game’s cutscenes. They’re a blend of cell-shaded graphics and beautifully textured 3D, and they come together to create scenes like nothing I’ve ever seen before. Every little movement is liquid smooth and every camera pan looks like something out of the most high-budget animation you’ve ever seen.

Ni no Kuni holds up well on the play side, too. It has a standard RPG backbone, but the presentation is so charming that you won’t be hung up on the lack of any major innovation. After encountering an enemy you’re whisked away to a battle view where your character’s head is surrounded by a ring of word bubbles. From there you can scroll through them to attack, guard, use items and more. During these turn-based battles you’re free to move around the battle field to avoid enemies, or move closer to them. It’s so pretty, even when you’re dying.

I was surprised to find that such an approachable game could dish out a fair bit of challenge. I may have wandered a bit too far in my second play, but I found myself nearing death quickly. One party member was actually taken out by smaller enemies a couple of times! Maybe I should have used the previously mentioned free movement in battles a bit more.

Even if you’re not in the market for a JRPG, you’re going to want Ni no Kuni when you see it. It’s impossibly pretty, and it shows what can happen when talented creators take their time to make something shine.

The bad news is that we still don’t know if this game will see a release on our shores. But if it never does, there’s at least one upside on the accessibility front: all the kanji has rubi text, meaning that those with iffy Japanese reading skills like mine can probably get by fairly easily.

Ni no Kuni will be released in Japan on November 17. We’ll see it next year!