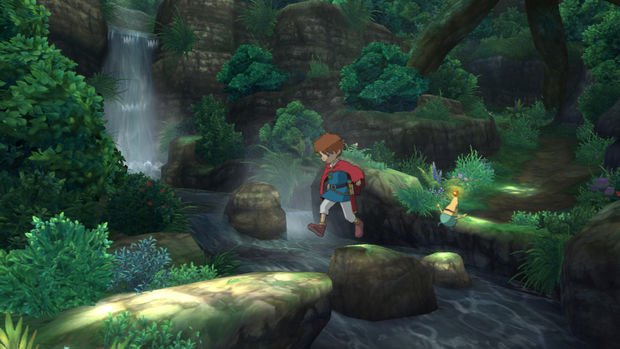 Perhaps I don’t speak for everyone here, but I’d still be invested in playing the game even if game critic #41 told me it doesn’t play very well, because the world of Ni no Kuni is so darn charming and colorful that I’m willing to put up with some minor gripes and boring combat.

Luckily, I didn’t have to put up with any noticeable flaws at all. This is game critic #153 telling you this game is pretty much what you expect and that’s not a bad thing at all.

With art direction and animation by Japanese anime juggernaut Studio Ghibli and everything else handled by Level-5, one of the last Japanese companies keeping the Japanese-style RPG alive as we know it, Ni no Kuni is somewhat of a dream come true for fans of Japanese entertainment.

Anyone familiar with the revered output of either will immediately recognize the elements each company put into the game. You have the large, ambitious overworld and complex battle system (30+ tutorials near the beginning), often found in Level-5 games, right beside the adorable, fantastical creature design of Ghibli.

Despite being able to immediately recognize signature traits between the two companies, Ni no Kuni doesn’t bring any specific project to mind in either’s catalog. The world is far too fantastical and the atmosphere too carefree to be comparable to Howl’s Moving Castle or Princess Mononoke. And, the game is far too accessible and traditional to be comparable to Rogue Galaxy or Dark Cloud 2, though Dragon Quest VIII comes close.

The demo I played was identical to the gamescom build, outside some minor improvements to the localization. It contained two sections: One at the very start of the adventure and another a couple hours in with a level 20 character. Between the two, I got a good grasp of the combat and scenario variety that will appear in the final release.

I’m not very enthusiastic about the game’s combat, but I’m not quite down on it, either. After seeing videos of it, I assumed it would be a real-time button mashfest like other Namco RPGs (see: Tales series and Eternal Sonata). The battles play out in real time and give you control over your character, but it feels much slower and strategic because the game pauses whenever you decide to take action. You also have a lot of characters to juggle, since each member of your party can act as well as summon a familiar (think Pokémon) to join the fight. Each familiar has certain elemental strengths, so it helps to summon an ice-friendly one to battle a fire-centric boss.

In motion, Ni no Kuni looks stunning even after becoming so familiar with its visuals over the past couple years. When the camera draws close to the characters, the lack of detail sinks in but you’ll rarely have this happen. This is the type of nitpicky complaint that can only come from the rest of the game looking so good. The music, British voice acting, and dialogue add to the charm of the game that focuses on a much milder, kid-friendly story and aesthetic than recent RPGs. There are no brooding teenagers or giant armored mechs with swords here. Instead you have wizards, cute animals, and possessed creatures that would feel right at home in most Ghibli productions.

As much as I adore Level-5’s ambitious, colorful take on the traditional Japanese RPG, I’m not always keen on the games that the developer puts out. Sometimes they lose me and I feared that Ni no Kuni would be one of those times. There is nothing that blows me away about this game beyond the visuals, but it seems like it will contain the slight but charming wondrous adventure that I wanted Blue Dragon to deliver so badly, years ago.

Everything from the hand-drawn mini-map to enemy design is so charmingly twee. After all, this is a game where there is a place called Ding Dong Dell, a character called Drippy, and an item called Gold Glim. If you can get behind that, you may just find a new RPG favorite in Ni no Kuni.

Filed under... #Anime#Level 5#Ni no Kuni: Wrath of the White Witch#Role-Playing Games